Items related to The Coldest Winter Ever

Souljah, Sister The Coldest Winter Ever

The Coldest Winter Ever 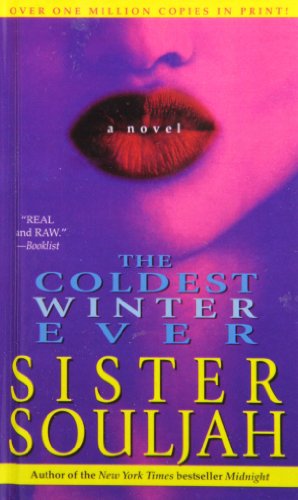 I came busting into the world during one of New York's worst snowstorms, so my mother named me Winter.

Ghetto-born, Winter is the young, wealthy daughter of a prominent Brooklyn drug-dealing family. Quick-witted, sexy, and business-minded, she knows and loves the streets like the curves of her own body. But when a cold Winter wind blows her life in a direction she doesn't want to go, her street smarts and seductive skills are put to the test of a lifetime. Unwilling to lose, this ghetto girl will do anything to stay on top.

The Coldest Winter Ever marks the debut of a gifted storyteller. You will never forget this Winter's tale.

Sister Souljah is best known for her work as a political activist and educator of underclass urban youth. A graduate of Rutgers University, she is a beloved personality in her own community. She lives in New York with her husband and son.

1. The Coldest Winter Ever