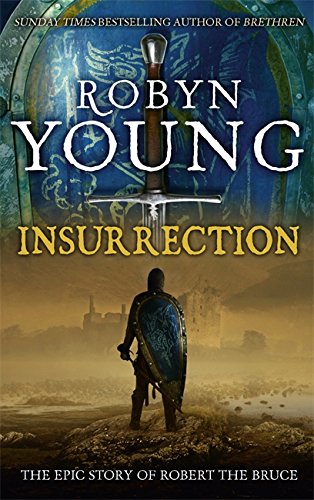 About the Author:
Robyn Young was born in Oxford and grew up in the Midlands and Devon. She has a Masters in Creative Writing from the University of Sussex and lives and writes in Brighton full-time. Her first novel, BRETHREN, was the bestselling hardback debut novel of 2006, with the paperback also going straight into the top ten bestseller list. Two more bestsellers followed, CRUSADE and REQUIEM, completing the Brethren trilogy, which has now sold over a million copies and been translated into nineteen languages.The inspiration for Robyn's new trilogy, which began with INSURRECTION and continues in RENEGADE, grew out of an earlier research trip to Scotland. Robyn explains: 'Day by day, out of the pages of history and the wild landscape, one figure came striding, larger, clearer than all the others - Robert the Bruce. He swept me off my feet and carried me into a story of bitter family feuds, two civil wars and the struggle for the crown. I realised there was no way this character could play a cameo role in another man's story. His tale was too powerful, too intricate and too good to be cut down and boxed to fit.'To find out more about Robyn Young and her historical novels, visit her website at www.robynyoung.com and her Facebook page at www.facebook.com/RobynYoungAuthor and follow her on Twitter @RobynYoung36
Review:
Like Young's other historical novels, INSURRECTION is meticulously researched . . . a treat for any fans of the Scottish Wars of Independence. * Historical Novel Review * Wonderful . . . loaded with atmosphere, action, and intrigue * Steve Berry on BRETHREN * One of the best historical debuts in recent memory. Exciting and enthralling. * John Connolly on BRETHREN * A sweeping historical adventure as well as a cracking sequel * Financial Times on CRUSADE * An outstanding contemporary writer * Kate Mosse on Robyn Young * Young writes with remarkable accuracy, action-packed efficiency and gut-wrenching violence * The Times on REQUIEM * Given the events are fixed in historical fiction, the trick is to find supplementary reasons for actions, and Young's conceit - that Edward I is trying to capture four relics (one of which is the Stone of Destiny) - gives a great ulterior motivation. The learning is never cumbersome, a deft trick when describing medieval warfare in all its clunking barbarism. * Scotsman * A cracking plot and charismatic characters are set against the convincingly researched background of the violent, gory Anglo-Scottish civil wars * Saga * Ideal for anyone who loves historical fiction and anyone else who wants a well written and intricate read * Sentinel (Staffordshire) * Action-packed historical novel about Robert The Bruce. A fighting start to a new trilogy. * Sun * This is a big book, and the trilogy a huge project to undertake. From the evidence so far, Young's fans will not be disappointed as she meticulously ploughs through the sweep of history and brings to life one of its most enigmatic characters * Daily Mail * another fine novel by Young and a promising start to an exciting new series * Canberra Times * This tale captures the struggles of a tumultuous time * Australian Daily Telegraph * Leads you in swiftly and doesn't let you go * Australian Women's Weekly * The fast and furious start to a majestic new trilogy * Women and Home * Richly worked and captivating . . . an epic story of war, intrigue and heroism * Good Book Guide on BRETHREN * It is so graphic you can immediately put yourself there, imagining the faces and the clash of weapons. It also elaborates on the historical context and fleshes out the characters. It draws you in and is a compelling novel you cannot put down. So much research must have gone into the book; the detail is incredible. I enjoyed it so much. * The BBC Radio 2 Simon Mayo Book Club * Young's fans will not be disappointed as she meticulously ploughs through the sweep of history and brings to life one of its most enigmatic characters * Daily Mail * Immaculately researched and carefully written, evoking a very particular - and largely unexplored - time and place. The fights are sensational. * Daily Telegraph *