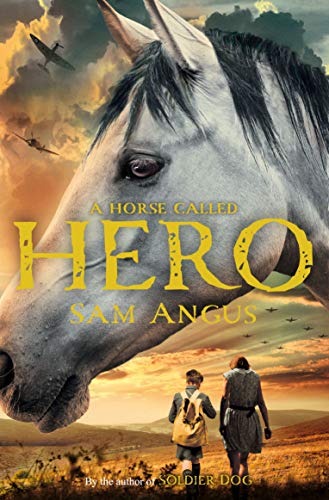 Sam Angus grew up in Spain. She studied literature at Trinity College in Cambridge and taught English before becoming a ski wear designer. She's the author of Soldier Dog and divides her time between London and Exmoor with her children, horses, and dogs.

Wolfie stopped, distracted by the stacks of sandbags and newly dug trenches. Above Rotten Row, silver barrage balloons strained and sang on their cables. They were like sails in a high wind, he thought, or great prehistoric birds. Tolerant of her small and willful brother, Dodo waited, sighing loudly as Wolfie turned to look at some cavalry, dropping his gas mask to the ground. A team of grey horses was trotting brightly up the South Carriage Drive. Wolfie watched, transfixed; Captain had been a grey too. After the war Pa had ridden Captain along the North Ride for the Victory Parade of 1918, the medal on his chest, the cheering crowds, all captured in Ma’s photograph on the mantel at home.

The horses drew closer and halted, luminous and magical as a troop of moons come down to earth. A frown creased Wolfie’s brow. He remembered Pa, here in the park, after war broke out, the day before he’d left to fight again in France. He remembered how he’d turned, white-faced, from the animals he so loved, and said, “I hate all of it and what it stands for…” Wolfie had felt confused then, and shocked, and still felt confused now.

He gave a determined shrug, took Dodo’s hand, and asked, for the hundredth time, his heart bright and staunch with pride, his face luminous with the spotless sweetness of the very young and very loved, “Pa did a great thing, didn’t he, Dodo? That’s why he got the medal. The bravest of the brave, isn’t he?”

“You look silly in a skirt, Dorothy.”

This was currently Wolfie’s favored riposte to an unwelcome instruction, guaranteed to annoy. Dodo scowled at the hateful name, at the hateful pleated skirt.

“And you have a silly name. Wolfgang is a German name.”

“Quick march,” Dodo instructed her one-man troop. Wolfie’s world was filled with brigades and beating drums, banners and bugles. Only cavalry instructions would get the result that Dodo wanted. Wolfie gathered a set of imaginary reins, extended an imaginary lance, and galloped away, whispering to himself, “He will be brave and he will have a silver tip to his tail…”

Wolfie galloped all the way to the bus stop at Lancaster Gate. At the poster of the child and gas mask, his gallop faltered. Dodo waited, smiling.

Wolfie snatched it and galloped on.

Stacks of dark green stretchers stood between the new brick-surface shelters at Lancaster Gate. A new sign read SHELTER THIS WAY. There was a shelter at school too, but it was like a damp brown igloo inside, with garish nasturtiums on the roof. London was in a state of perpetual preparation and precaution, something immense always on the brink of happening. Everywhere the endless warnings about gas masks, everywhere the constant instruction to leave London, to “give children a chance of greater safety and health,” every day the announcement that the evacuation of children from the cities would continue. But how could you leave London when no one knew where your father was, when he might return at any minute, when you only had Spud to look after you, and she didn’t seem to know any more than you did?

When they reached George’s corner shop, Wolfie, thinking of his sweet ration, abandoned his rein and lance, and began to excavate a pocket, groping for the coin that must be there somewhere. Dodo, giving him as always her own ration slip, hustled him inside, with her studied attitude of tolerant exasperation.

George came out, waved to Dodo, then bent to chalk a message on the stand of the Daily Mirror to the right of the door:

Dodo’s stomach lurched, her hands flew to her mouth, and she was screaming inwardly, Where is he? Where is Pa? Was he on his way back? Would he be back tonight? Tomorrow?

Wolfie emerged with two ounces of lurid Torpedoes in a paper bag, a violet one in his mouth, staining his lips.

“Have we won the war, Dodo?” he asked in a loud voice.

Wolfie had to decode the progress of the war only from Spud the housekeeper’s grumblings and mumblings and his sister’s occasional pronouncements. He frowned, digested this new clue, then dismissed it as not fitting with his view of the way things should go.

“Pa will get another medal, won’t he, Dodo?” he said comfortably.

“Home,” ordered Dodo, her heart thumping a drumbeat. Where is he, where is he?

She remembered the tears down Pa’s face when a thin and trembly voice on the radio had announced that Britain was at war. When the National Anthem started, Pa had snapped the wireless off. Spud, roused and teary, the plate of roast beef in her hands, had said, “Think of all our men going…” And Pa had answered, “Spud, think of all the women in Germany saying the same thing.”

Only Pa could call Mrs. Spence a name like Spud. Since Ma died, Spud had taken over the running of the house and the care of the children. She was so fond of Pa, so proud to work for him, that he could call her anything. But that evening she’d looked at Pa, shocked and perhaps a little wounded too.

Dodo marched Wolfie on. She remembered the OHMS letter recalling Pa to the Army, Pa’s grief and his reluctance to leave the work he’d been doing, his papers and speeches about the conditions of the coal miners. He’d wanted, really wanted to continue that work. Then the second OHMS letter had come, warning Pa to report. Dodo remembered Spud saying darkly that Pa must either report or be arrested. In the end Pa had gone. Dodo turned into Addison Avenue. But now Paris had fallen; Pa must be coming back from France.

“Halt,” she said as Wolfie reached the iron gate of Number 25, but her troop mutinied on the generous stone steps, was launching itself at the double door, erupting through it, scattering satchel and mask across the black-and-white-checkered floor.

Spud was standing on a chair in the dining room, her sturdy figure loosely enveloped in swathes of black sateen. “Ha,” she said, fitting the last hook, hands on her cumbersome hips. “Not a chink of light will escape now.” Dodo hovered beside her, a question on her lips but Spud dismounted, turned from her, and said, “Wolfgang Revel, must you always be such an explosion?” She gathered up his coat, cap, satchel, and mask. Wolfie ran to the map pinned above the sideboard.

“Where? Where?” he asked, his small hand hovering over Luxembourg and Belgium. “Where do I move our men?” Wolfie’s confidence in victory had survived, undaunted, the flood of black pinheads into Poland, Norway, Luxembourg, Belgium, and the Netherlands. “Better off on our own,” Spud had sniffed at the fall of Belgium, happy at such concrete evidence of the feebleness of foreigners.

Spud put her finger on the French coast. “Twenty-one miles of water is all that separates us from the enemy. Just a bit of water and it’s not just our soldiers that are coming back across that water, it’s the war, coming here”—she jabbed a plump forefinger on Dover—“right back here.” Spud favored a gaudy and sensational turn of phrase, and was prone to speaking in headlines.

“But have we won?” Wolfie asked, bewildered.

“Then why’re the soldiers coming back?”

Dodo, still hovering close to Spud, waiting for the right minute, asked finally, “Is it true? Are they—is Pa—will he…?”

Spud pursed her lips and busied herself at the tea table with the plate of boiled beef. Dodo waited as Spud lamented the dangers of London, the closeness of the war, the suitability of countryside in general for children, digressing into her perpetual lament about the difficulty of knowing how to go about things when she never heard anything, when for all she knew anything could have happened and was she expected to go on forever alone?

Spud liked the children to remain aware at all times of the trying circumstances in which she had to operate. These were all familiar themes to Wolfie so he took no notice, but Dodo watched her closely.

Spud removed the remains of beef and served pudding. Wolfie stared at his bowl.

“Roly-poly with no jam is no fun.”

He moved aside his bowl and emptied an old Highland shortbread tin onto the table. Lead cavalry figures spilt onto the mahogany surface.

He picked up the horse he called Captain, after Pa’s horse, and placed him upright, glancing as he did so at the photograph on the mantel of Pa on Captain, Captain’s grey coat lustrous as a star against the dark crowds, the bronze cross on Pa’s chest. Pa’s medal for the Moreuil Wood, for the last great cavalry charge, was a flame to Wolfie, a flame to warm him, Pa’s honor a light to live by.

Dodo glanced at Wolfie before turning to Spud and whispering, “Wasn’t Pa on a boat—?”

Spud folded her arms. “I hear the Jameson twins have left town. And Posy Cayzer’s going to an aunt in Wiltshire … the country’s the sensible place for children.” Spud looked emphatically at Ma’s oil painting above the dresser, her largest canvas, of the russet and umber hills where she’d holidayed as a child.

“Are all our men coming home?” Dodo persisted. “Haven’t you heard anything—?”

“How am I to know…?” muttered Spud, collecting a basket of fresh towels from the laundry.

Book Description Pan MacMillan, United Kingdom, 2013. Paperback. Condition: New. Main Market Ed. Language: English. Brand new Book. It is 1940. As the Second World War escalates and London becomes a target for German bombs, Dodo and her horse-mad little brother Wolfie are evacuated to the country, away from everything they know. After weeks of homesick loneliness, they come across an orphaned foal. They name the horse Hero for surviving against the odds and together they raise him, train him, and learn to ride. Their days are suddenly full of life and excitement again, but the shadow of war looms over their peaceful existence, and soon Hero must live up to his name . . . Seller Inventory # AA79781447235774

Shipping: US$ 37.87
From United Kingdom to U.S.A.
Destination, rates & speeds