Items related to Unashamed (Coming Out of the Second Closet)

Shawn Aaron Thomas Unashamed (Coming Out of the Second Closet)

Unashamed (Coming Out of the Second Closet) 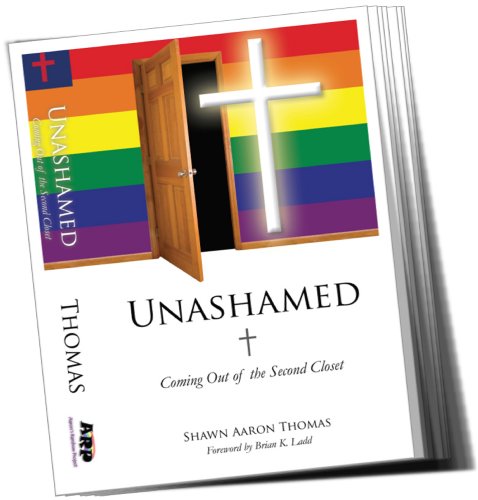 From the Foreword: Shawn's rich and profound passion for God has garnered him much praise, and believe it or not, criticism... many of Shawn's critics come from within the gay community itself. Why? Because Shawn is either 'not gay enough' or because he is 'too Christian.' (Brian K. Ladd)

From the Afterword: This is not a book on why you should think the way I do...I only ask to be welcome at the table of ideas and expression. I have written this book for two reasons:
1. To shatter the mold that limits religious and political expression within the GLBT community.
2. To assure others who don't fit that mold that, 'You are not alone.' (Shawn Thomas)

Shawn Aaron Thomas is a nationally touring contemporary Christian singer/songwriter and worship leader and is a voting member in good standing of the Grammy Recording Academy. He is also the owner of Shawn Thomas Studios in West Palm Beach, Florida, providing audio recording, production, and mastering services to independent artists, songwriters, and bands.

Shawn Thomas received the 2008 Editor s Choice Award from QNation.fm for the single, You Are Here Lord, and is a three-time Pride in the Arts Awards (StoneWallSociety.com) recipient and 10-time nominee. His 2003 CD, Everything I Am, spun two number one singles and remained on the Top 20 for more than 12 months on Pride Christian Music. His follow-up project in 2005, Changed, received a nomination for Outstanding New Inspirational Recording from OutMusic.com. The 2006 release, Faith Unashamed, listed on OutVoice.nets Top40 for over 23 months and in the Top10 for over a year. At the time of publication, the video for the single What am I Gonna Do with You is the most viewed music video on TheQTube.

In 2009, his compilation CD, Revisited Vol. 2, was named Album of the Year by the Voters Choice Awards from the Unashamed Faith Cafe Radio Program.

He and his partner, Brian, make their home in south Florida along with the Pug-Dog-Almighty, Zoe .

Unashamed is compelling. Shawn Thomas tackles controversial political and spiritual issues such as same-sex marriage and Prop 8, gender inclusive language, LGBT party platforms, among others. He breaks the typical mold for gay America and playfully opens the door for conversation. He passionately seeks authenticity, and despite our political standings, we gladly go for the ride. --Linda Beckstead of Brenner-Beckstead Ministries

1. Unashamed (Coming Out of the Second Closet)

Book Description Aaron's Rainbow Project, 2010. Condition: Good. First. Shows some signs of wear, and may have some markings on the inside. Seller Inventory # GRP83343749

2. Unashamed : Coming Out of the Secound Closet

Book Description Independent Publisher. Paperback. Condition: Good. A copy that has been read, but remains in clean condition. All pages are intact, and the cover is intact. The spine may show signs of wear. Pages can include limited notes and highlighting, and the copy can include previous owner inscriptions. The dust jacket is missing. At ThriftBooks, our motto is: Read More, Spend Less. Seller Inventory # G1450733522I3N01