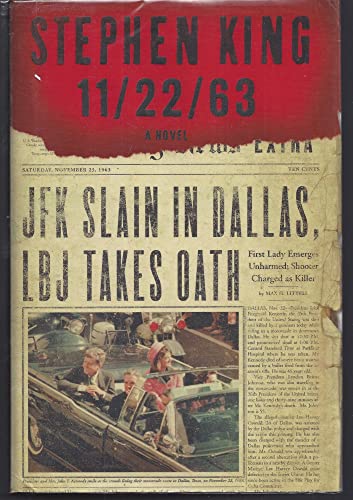 On November 22, 1963, three shots rang out in Dallas, President Kennedy died, and the world changed. What if you could change it back? Stephen King’s heart-stoppingly dramatic new novel is about a man who travels back in time to prevent the JFK assassination—a thousand page tour de force.

Following his massively successful novel Under the Dome, King sweeps readers back in time to another moment—a real life moment—when everything went wrong: the JFK assassination. And he introduces readers to a character who has the power to change the course of history.


Jake Epping is a thirty-five-year-old high school English teacher in Lisbon Falls, Maine, who makes extra money teaching adults in the GED program. He receives an essay from one of the students—a gruesome, harrowing first person story about the night 50 years ago when Harry Dunning’s father came home and killed his mother, his sister, and his brother with a hammer. Harry escaped with a smashed leg, as evidenced by his crooked walk.

Not much later, Jake’s friend Al, who runs the local diner, divulges a secret: his storeroom is a portal to 1958. He enlists Jake on an insane—and insanely possible—mission to try to prevent the Kennedy assassination. So begins Jake’s new life as George Amberson and his new world of Elvis and JFK, of big American cars and sock hops, of a troubled loner named Lee Harvey Oswald and a beautiful high school librarian named Sadie Dunhill, who becomes the love of Jake’s life—a life that transgresses all the normal rules of time.

A tribute to a simpler era and a devastating exercise in escalating suspense, 11/22/63 is Stephen King at his epic best.

On Monday, March 25, Lee came walking up Neely Street carrying a long package wrapped in brown paper. Peering through a tiny crack in the curtains, I could see the words REGISTERED and INSURED stamped on it in big red letters. For the first time I thought he seemed furtive and nervous, actually looking around at his exterior surroundings instead of at the spooky furniture deep in his head. I knew what was in the package: a 6.5mm Carcano rifle—also known as a Mannlicher-Carcano—complete with scope, purchased from Klein’s Sporting Goods in Chicago. Five minutes after he climbed the outside stairs to the second floor, the gun Lee would use to change history was in a closet above my head. Marina took the famous pictures of him holding it just outside my living room window six days later, but I didn’t see it. That was a Sunday, and I was in Jodie. As the tenth grew closer, those weekends with Sadie had become the most important, the dearest, things in my life.

I came awake with a jerk, hearing someone mutter “Still not too late” under his breath. I realized it was me and shut up.

Sadie murmured some thick protest and turned over in bed. The familiar squeak of the springs locked me in place and time: the Candlewood Bungalows, April 5, 1963. I fumbled my watch from the nightstand and peered at the luminous numbers. It was quarter past two in the morning, which meant it was actually the sixth of April.

Still not too late.

Not too late for what? To back off, to let well enough alone? Or bad enough, come to that? The idea of backing off was attractive, God knew. If I went ahead and things went wrong, this could be my last night with Sadie. Ever.

Even if you do have to kill him, you don’t have to do it right away.

True enough. Oswald was going to relocate to New Orleans for awhile after the attempt on the general’s life—another shitty apartment, one I’d already visited—but not for two weeks. That would give me plenty of time to stop his clock. But I sensed it would be a mistake to wait very long. I might find reasons to keep on waiting. The best one was beside me in this bed: long, lovely, and smoothly naked. Maybe she was just another trap laid by the obdurate past, but that didn’t matter, because I loved her. And I could envision a scenario—all too clearly—where I’d have to run after killing Oswald. Run where? Back to Maine, of course. Hoping I could stay ahead of the cops just long enough to get to the rabbit-hole and escape into a future where Sadie Dunhill would be . . . well . . . about eighty years old. If she were alive at all. Given her cigarette habit, that would be like rolling six the hard way.

I got up and went to the window. Only a few of the bungalows were occupied on this early-spring weekend. There was a mud- or manure-splattered pickup truck with a trailer full of what looked like farm implements behind it. An Indian motorcycle with a sidecar. A couple of station wagons. And a two-tone Plymouth Fury. The moon was sliding in and out of thin clouds and it wasn’t possible to make out the color of the car’s lower half by that stuttery light, but I was pretty sure I knew what it was, anyway.

I pulled on my pants, undershirt, and shoes. Then I slipped out of the cabin and walked across the courtyard. The chilly air bit at my bed-warm skin, but I barely felt it. Yes, the car was a Fury, and yes, it was white over red, but this one wasn’t from Maine or Arkansas; the plate was Oklahoma, and the decal in the rear window read GO, SOONERS. I peeked in and saw a scatter of textbooks. Some student, maybe headed south to visit his folks on spring break. Or a couple of horny teachers taking advantage of the Candlewood’s liberal guest policy.

Just another not-quite-on-key chime as the past harmonized with itself. I touched the trunk, as I had back in Lisbon Falls, then returned to the bungalow. Sadie had pushed the sheet down to her waist, and when I came in, the draft of cool air woke her up. She sat, holding the sheet over her breasts, then let it drop when she saw it was me.

“I had a bad dream and went out for some air.”

I unbuttoned my jeans, kicked off my loafers. “Can’t remember.”

“Try. My mother always used to say if you tell your dreams, they won’t come true.”

I got into bed with her wearing nothing but my undershirt. “My mother used to say if you kiss your honey, they won’t come true.”

“Did she actually say that?”

“Well,” she said thoughtfully, “it sounds possible. Let’s try it.”

One thing led to another.

Afterward, she lit a cigarette. I lay watching the smoke drift up and turn blue in the occasional moonlight coming through the half-drawn curtains. I’d never leave the curtains that way at Neely Street, I thought. At Neely Street, in my other life, I’m always alone but still careful to close them all the way. Except when I’m peeking, that is. Lurking.

I looked at her. She inhaled deeply, enjoying her cigarette guiltlessly, as people do in the Land of Ago. “I don’t have any inside information, if that’s what you’re thinking. But it stands to reason. The rest of your past is made up, after all. And I’m glad. I don’t like George all that much. It’s kind of . . . what’s that word you use sometimes? . . . kind of dorky.”

“How does Jake suit you?”

“I like it.” She turned to me. “In the Bible, Jacob wrestled an angel. And you’re wrestling, too. Aren’t you?”

“I suppose I am, but not with an angel.” Although Lee Oswald didn’t make much of a devil, either. I liked George de Mohren--schildt better for the devil role. In the Bible, Satan’s a tempter who makes the offer and then stands aside. I hoped de Mohrenschildt was like that.

Sadie snubbed her cigarette. Her voice was calm, but her eyes were dark. “Are you going to be hurt?”

“Are you going away? Because if you have to go away, I’m not sure I can stand it. I would have died before I said it when I was there, but Reno was a nightmare. Losing you for good . . .” She shook her head slowly. “No, I’m not sure I could stand that.”

“Of course. But I do have to ask one teensy question.”

“Am I single? Legally single? Is that what you want to know?”

She let out a comic sigh and grinned like a kid. Then she sobered. “Can I help you? Let me help you.”

The thought turned me cold, and she must have seen it. Her lower lip crept into her mouth. She bit down on it with her teeth. “That bad, then,” she said musingly.

“Let’s put it this way: I’m currently close to a big machine full of sharp teeth, and it’s running full speed. I won’t allow you next to me while I’m monkeying with it.”

“Still to be determined.” I had a feeling that I’d said too much already, but since I’d come this far, I decided to go a little farther. “Something’s going to happen this Wednesday night. Something I have to witness. Then I’ll decide.”

“Thanks,” I said. “I appreciate that. And you really will marry me?”

“Now that I know your name is Jake? Of course.”