Items related to The Road to Grace (The Walk Series)

Evans, Richard Paul The Road to Grace (The Walk Series) 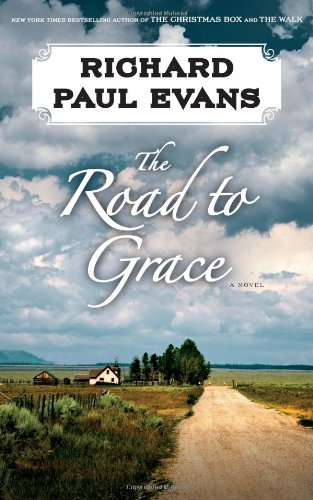 Join one of America€™s beloved storytellers on a walk like no other: one man€™s unrelenting search for hope. Reeling from the sudden loss of his wife, his home, and his business, Alan Christoffersen, a once-successful advertising executive, has left everything he knew behind and set off on an extraordinary cross-country journey. Carrying only a backpack, he is walking from Seattle to Key West, the farthest destination on his map. Now almost halfway through his trek, Alan sets out to walk the nearly 1,000 miles between South Dakota and St. Louis, but it€™s the people he meets along the way who give the journey its true meaning: a mysterious woman who follows Alan€™s walk for close to a hundred miles, the ghost hunter searching graveyards for his wife, and the elderly Polish man who gives Alan a ride and shares a story that Alan will never forget. Full of hard-won wisdom and truth, The Road to Grace is a compelling and inspiring novel about hope, healing,

Richard Paul Evans is the #1 bestselling author of The Christmas Box. Each of his more than thirty-five novels has been a New York Times bestseller. There are more than thirty-five million copies of his books in print worldwide, translated into more than twenty-four languages. He is the recipient of numerous awards, including the American Mothers Book Award, the Romantic Times Best Women’s Novel of the Year Award, the German Audience Gold Award for Romance, five Religion Communicators Council Wilbur Awards, the Washington Times Humanitarian of the Century Award and the Volunteers of America National Empathy Award. He lives in Salt Lake City, Utah, with his wife, Keri, and their five children. You can learn more about Richard on Facebook at Facebook.com/RPEFans, or visit his website RichardPaulEvans.com.

PROLOGUE
Note
The sun will rise again. The only uncertainty is whether or not we will rise to greet it.

Several months after I was mugged, stabbed, and left unconscious along the shoulder of Washington’s Highway 2, a friend asked me what being stabbed felt like. I told her it hurt.

Really, how do you describe pain? Sometimes doctors ask us to rate our pain on a scale from one to ten, as if that number had some reliable meaning. In my opinion there needs to be a more objective rating system, something comparative; like, would you trade what you’re feeling for a root canal or maybe half a childbirth?

And with what would we compare emotional pain—physical pain? Arguably, emotional pain is the greater of the two evils. Sometimes people will inflict physical pain on themselves to dull their emotional anguish. I understand. If I had the choice between being stabbed or losing my wife, McKale, again, the knife has the advantage—because if the knife kills me, I stop hurting. If it doesn’t kill me, the wound will heal. Either way the pain stops. But no matter what I do, my McKale is never coming back. And I can’t imagine that the pain in my heart will ever go away.

Still, there is hope—not to forget McKale, nor even to understand why I had to lose her—but to accept that I did and somehow go on. As a friend recently said to me, no matter what I do, McKale will always be a part of me. The question is, what part—a spring of gratitude, or a fountain of bitterness? Someday I’ll have to decide. Someday the sun will rise again. The only uncertainty is whether or not I will rise to greet it.

In the meantime, what I hope for most is hope. Walking helps. I wish I were walking again right now. I think I’d rather be anywhere right now than where I am.