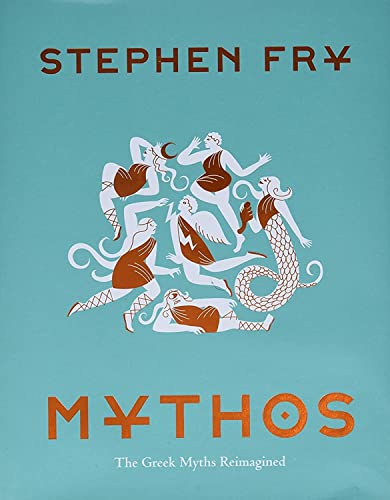 Mythos is a modern collection of Greek myths, stylishly retold by legendary writer, actor, and comedian Stephen Fry. Fry transforms the adventures of Zeus and the Olympians into emotionally resonant and deeply funny stories, without losing any of their original wonder.

This stunning book features classical artwork inspired by the myths, as well as learned notes from the author.

· Each adventure is infused with Fry's distinctive wit, voice, and writing style
· Connoisseurs of the Greek myths will appreciate this fresh-yet-reverential interpretation, while newcomers will feel welcome
· Retellings brim with humor and emotion and offer rich cultural context

This gorgeous volume invites you to explore a captivating world with the brilliant storyteller Stephen Fry as your guide.
· A collectible volume complete with a textured case, a foil-stamped jacket, and full-color art throughout
· The perfect gift for Greek mythology and history buffs, lovers of ancient Greece, art aficionados, and devoted fans of Stephen Fry
· Add it to the shelf with books like Circe by Madeline Miller, Norse Mythology by Neil Gaiman, and Mythology: Timeless Tales of Gods and Heroes by Edith Hamilton

Stephen Fry is an award-winning writer, comedian, actor, and director. He rose to fame in A Bit of Fry & Laurie and Jeeves and Wooster. He hosted over 180 episodes of QI, and narrated the audio versions of the Harry Potter novels. His books include four novels and three volumes of autobiography. He lives in Los Angeles and London.

"If you ever thought Greek mythology was intimidating, Stephen Fry's approach will appeal to you, as he explains the myths in casual terms relating them to modern-day people or events (yes, there's even a reference to Morrissey). There is also plenty of just generally funny commentary that had me laughing out loud and sharing passages with my family."
-GeekDad

Holiday Gift Pick "Let waggish comic actor Fry be your ferryman as he retells, with the aid of eminent classical artwork, the ancient and strangely au courant Greek legends. Among them: Zeus and Hera's coupling of which Cry writes, 'Crackling with tension, impatience, and disgust, theirs was nonetheless a great marriage.'"
- O, The Oprah Magazine