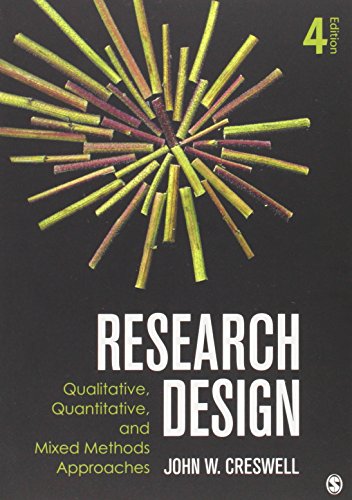 The eagerly anticipated Fourth Edition of the title that pioneered the comparison of qualitative, quantitative, and mixed methods research design is here! For all three approaches, Creswell includes a preliminary consideration of philosophical assumptions, a review of the literature, an assessment of the use of theory in research approaches, and refl ections about the importance of writing and ethics in scholarly inquiry. He also presents the key elements of the research process, giving specifi c attention to each approach. The Fourth Edition includes extensively revised mixed methods coverage, increased coverage of ethical issues in research, and an expanded emphasis on worldview perspectives.

John W. Creswell, PhD, is a professor of family medicine and codirector of the Michigan Mixed Methods Research and Scholarship Program at the University of Michigan. He has authored numerous articles and 28 books on mixed methods research, qualitative research, and research design. While at the University of Nebraska-Lincoln, he held the Clifton Endowed Professor Chair, served as director of a mixed methods research office, founded SAGE’s Journal of Mixed Methods Research, and was an adjunct professor of family medicine at the University of Michigan and a consultant to the Veterans Administration health services research center. He was a Senior Fulbright Scholar to South Africa in 2008 and to Thailand in 2012. In 2011, he co-led a national working group on mixed methods practices at the National Institutes of Health, served as a visiting professor at Harvard’s School of Public Health, and received an honorary doctorate from the University of Pretoria, South Africa. In 2014, he was the president of the Mixed Methods International Research Association. In 2015, he joined the staff of family medicine at the University of Michigan. John has been teaching research methods courses for the past 40 years. Visit him at his website: johnwcreswell.com.