Items related to Robert's Rules of Order: The Original Edition 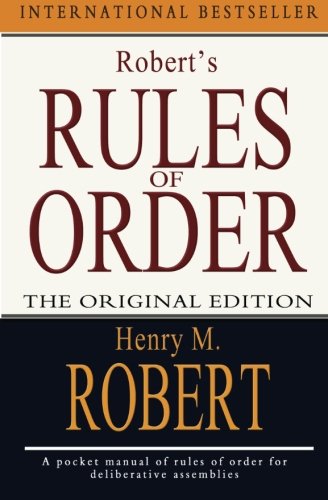 A concise and user-friendly guide to the essentials for conducting a meeting from the original Robert's Rules of Order.

The definitive guide to parliamentary procedure since 1876, Robert's Rules is used daily by private, governmental, business and social organizations large and small. This is a reprint of the first edition.

General Henry M. Robert, who gave his name to the book that has brought order to millions of meetings, was a U.S. Army Engineer officer of Huguenot decent born May 2, 1837. Led to study parliamentary law over a number of years by experiences in civil and church organizations, he published the first edition of Robert's Rules of Order on February 19, 1876. After his retirement from the Army in 1901, he practiced consulting engineering and devoted the last decade of his life to writing on parliamentary procedure. He died on May 11, 1923.

8. ROBERT'S RULES OF ORDER: THE ORI

9. ROBERT'S RULES OF ORDER: THE ORI