Items related to Top Dog: The Science of Winning and Losing

Top Dog: The Science of Winning and Losing 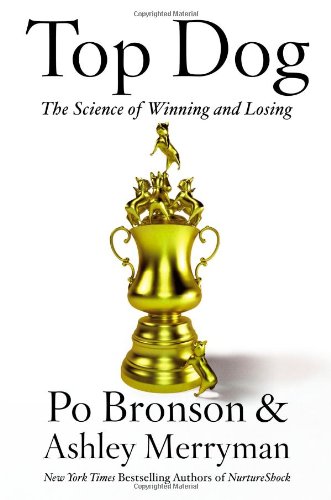 Po Bronson and Ashley Merryman's work changes the national dialogue. Beyond their bestselling books, you know them from commentary and features in the New York Times, CNN, NPR, Time, Newsweek, Wired, New York, and more. E-mail, Facebook, and Twitter accounts are filled with demands to read their reporting (such as "How Not to Talk to Your Kids," "Creativity Crisis," and "Losing Is Good for You").


In TOP DOG, Bronson and Merryman again use their astonishing blend of science and storytelling to reveal what's truly in the heart of a champion. The joy of victory and the character-building agony of defeat. Testosterone and the neuroscience of mistakes. Why rivals motivate. How home field advantage gets you a raise. What teamwork really requires. It's baseball, the SAT, sales contests, and Linux. How before da Vinci and FedEx were innovators, first, they were great competitors.

Olympians carry TOP DOG in their gym bags. It's in briefcases of Wall Street traders and Madison Avenue madmen. Risk takers from Silicon Valley to Vegas race to implement its ideas, as educators debate it in halls of academia. Now see for yourself what this game-changing talk is all about.

Q. Are you refuting the concept that it takes ten years of practice to get great at anything?

Po Bronson: Not at all, we feel our book is additive to that story. Nobody is judged on how they practice. They're judged on how they perform when it counts. Practicing is not the same as competing. You can pitch a million baseballs to your son until he perfects his swing--but wait until he faces a pitcher who wants him to miss. You might have ten years of experience in the advertising industry, but how do you handle the day your biggest client tells you they're leaving for a rival agency?

Ashley Merryman: The truth is, nobody puts in ten years before they start competing. The world doesn't work that way. We are all thrown into competitive situations, long before we've had enough practice. Our results are still judged; our fate is still determined by how we do. To survive these trials, we need more than practice. We need competitive fire.

Q. Did researching this book change how you each compete?

Ashley Merryman: I'm a girl. All my life, I've been told to "play nice." I heard it on the playground and then the grown-up version they say in boardrooms: women are better at coalition-building, not competing. The science says that's wrong. And it's not just about toughening up. Women are prone to weigh risks more carefully than men; when women are confident they have a good chance to succeed, they'll compete. Sometimes this is an asset (in certain domains), but sometimes it's a hindrance. I've learned to recognize when to tap into my gender's knack for risk-analysis, and when to ignore it.

Po Bronson: I didn't let many people know it, but before working on this book, I'd had a full-hip replacement and a few unsuccessful surgeries on my leg. I had many setbacks during rehab; I could barely walk at times. This affected every dimension of my life--it sapped my energy for my writing work and my volunteer projects. I was just losing my edge and my will to fight. Researching the book inspired me; it reminded me who I am. It restored my zeal for attacking big challenges. I hope the book does that for readers, first and foremost: gets them eager to surmount the challenges in their lives.

Q. Everyone says that companies must innovate to remain competitive--but does it work the other way around? Doesn't competition destroy creativity?

Po Bronson: There is a belief that creative genius is fragile and needs to be shielded from competition and comparison. But the research says that's a myth. Leonardo da Vinci loved to have his art put side by side with the work of others for debate over whose was best; Bach, too, liked to compete against other musicians in public concerts. Chemical fire extinguishers, food canning, transcontinental air travel--each began as the prize winner of a competition. Competition doesn't kill creativity: it facilitates creative output by supplying motivational drive.

Ashley Merryman: Whether professional musicians or school children, studies have shown competition fuels creativity and even improves the quality of the work produced. More than that, the skills that make you a great competitor--such as a willingness to push boundaries, trust one's instincts, problem-solve--those are the same skills needed for innovation.

Po Bronson and Ashley Merryman's NurtureShock was on the New York Times bestseller list for six months. One of the most influential books about children ever published, NurtureShock landed on more than 35 "Year's Best" lists and has been translated into 16 languages. The authors have won nine national awards for their reporting, including the PEN USA Award for Literary Journalism and the American Association for the Advancement of Science Award for Outstanding Journalism. Prior to their collaboration, Bronson authored five books, including What Should I Do with My Life?, a #1 New York Times bestseller with more than ten months on the list. Merryman's journalism has appeared in Time, Newsweek, New York, The Washington Post, and many other venues. Bronson lives in San Francisco with his wife and two children. Merryman lives in Los Angeles.

1. Top Dog: The Science of Winning and Losing

2. Top Dog: The Science of Winning and Losing

3. Top Dog: The Science of Winning and Losing

4. Top Dog: The Science of Winning and Losing

5. Top Dog: The Science of Winning and Losing

6. Top Dog: The Science of Winning and Losing Bronson, Po and Merryman, Ashley

8. Top Dog: The Science of Winning and Losing

9. Top Dog: The Science of Winning and Losing

10. Top Dog: The Science of Winning and Losing Bronson, Po and Merryman, Ashley