Items related to Everything's an Argument 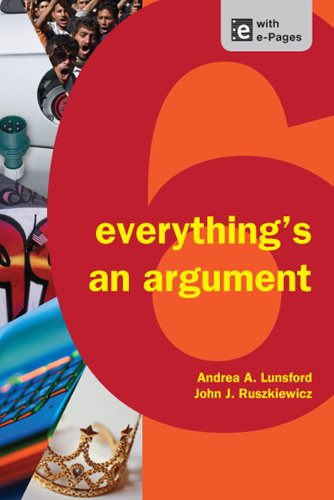 This best-selling brief text shows students how to analyze all kinds of argument — not just essays and editorials, but clothes, cars, ads, and even website designs — and then how to use what they learn to write effective arguments.

Andrea A. Lunsford is professor of English at Stanford University and also teaches at the Bread Loaf School of English. A past chair of CCCC, she has won the major publication awards in both the CCCC and MLA. For Bedford/St. Martin’s she is the author of The St. Martin's Handbook, Seventh Edition, The Presence of Others, Fifth Edition, and The Everyday Writer, Fifth Edition, as well as the Sixth Edition of both Everything’s an Argument books.

John J. Ruszkiewicz is a professor at the University of Texas at Austin where he has taught literature, rhetoric, and writing for more than thirty years. A winner of the President’s Associates Teaching Excellence Award, he was instrumental in creating the Department of Rhetoric and Writing in 1993 and directed the unit from 2001-05. He has also served as president of the Conference of College Teachers of English (CCTE) of Texas. For Bedford/St. Martin's, he is coauthor, with Andrea Lunsford, of The Presence of Others (2008) and Everything’s An Argument (2007), and coauthor, with Andrea Lunsford and Keith Walters, of Everything's An Argument with Readings (2007). Keith Walters is professor of applied linguistics at Portland State University. Much of his research focuses on language and identity in North Africa, especially Tunisia, and the United States. He has also taught freshman composition and English as a second/foreign language.