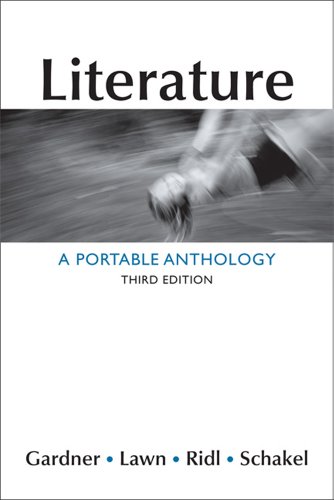 PACKAGE THIS TITLE WITH OUR 2016 MLA SUPPLEMENT, Documenting Sources in MLA Style (package ISBN-13: 9781319087388). Get the most recent updates on MLA citation in a convenient, 40-page resource based on The MLA Handbook, 8th Edition, with plenty of models. Browse our catalog or contact your representative for a full listing of updated titles and packages, or to request a custom ISBN.

With a handy size and a very affordable price, this collection offers a well-balanced selection of classic and contemporary literature — 40 stories, 200 poems, 9 plays — for the introductory literature course. The literature is chronologically arranged by genre and supported by informative and concise editorial matter, including a complete guide to writing about literature which features significantly more reading coverage in this edition. This volume in the popular Bedford/St. Martin's series of Portable Anthologies and Guides offers a trademark combination of high quality and great value.

This anthology is now available with video! Learn more about VideoCentral for Literature.

Janet E. Gardner (PhD, University of Massachusetts, Amherst) is Associate Professor of English at University of Massachusetts, Dartmouth, where she teaches courses in drama, British and world literature, and writing. She has published numerous articles, reviews, and chapters on contemporary drama, especially modern British drama and the work of Caryl Churchill. She has received several grants and awards for research into current teaching technologies, and is at work on a study of drama and theatre pedagogy. Beverly Lawn (PD, SUNY-Stony Brook), Professor of English Emerita, taught introductory fiction courses at Adelphi University for almost three decades. She is editor or coeditor several literature anthologies, including Literature: A Portable Anthology, and is also the author of Throat of Feathers, a book of poems. Jack Ridl is Professor Emeritus of English at Hope College where he taught courses in literature, essay writing, poetry writing, and the nature of poetry for thirty-five years. He has published six volumes of poetry and more than two hundred poems in some fifty literary magazines; his most recent collection, Broken Symmetry, was selected by the Society of Midland Authors as one of the two best volumes of poetry published in 2006. His chapbook Against Elegies received the 2001 Letterpress Award from the Center for Book Arts. His recognitions for teaching excellence include the Hope Outstanding Professor-Educator award at Hope College for 1976, the Michigan Teacher of the Year award from the Carnegie Foundation in 1996, and the Favorite Faculty/Staff Member award at Hope College in 2003. For Bedford/St. Martin’s, with Peter Schakel he coedited Approaching Poetry (1997) and 250 Poems (2003); and he is coeditor with Janet Gardner, Beverley Lawn, and Peter Schakel of Literature: a Portable Anthology (2004). Peter Schakel, Peter C. and Emajean Cook Professor of English at Hope College, has published numerous scholarly and pedagogical studies on Jonathan Swift and C. S. Lewis; with Jack Ridl, he has coedited Approaching Poetry (Bedford/St. Martin's, 1997) and Approaching Literature (Second Edition, Bedford/St. Martin's, 2008).