Items related to America’s History, For the AP* Course (Bedford... 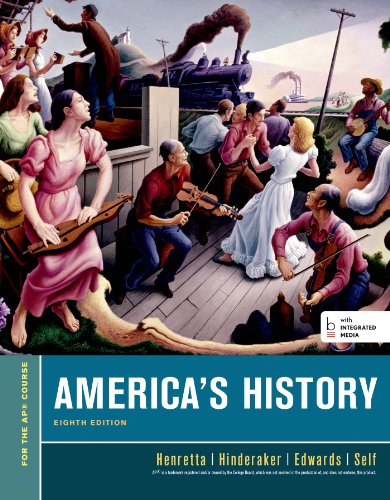 Your go-to book for the AP U.S. History redesign.
America's History offers a thematic approach and skills-oriented pedagogy that helps students succeed in the redesigned AP U.S. History course. Known for its attention to AP themes and content, the new edition features a new nine part structure closely aligned with the chronology of the new AP U.S. History course, an expanded documents program, and a wealth of supporting resources that give teachers and students the tools they need to master the course and the new exam. The eighth edition also rolls out Bedford/St. Martin's new digital history tools, including LearningCurve, an adaptive quizzing engine that garners over a 90% student satisfaction rate, and course space that puts high quality easy-to-use assessment at your fingertips. It's the best content joined up with the best technology.
*AP is a trademark registered and/or owned by the College Board, which was not involved in the production of, and does not endorse, this product. View a sample chapter.

James A. Henretta is a Professor Emeritus of American History at the University of Maryland, College Park. His publications includeThe Evolution of American Society, 1700-1815: An Interdisciplinary Analysis;"Salutary Neglect": Colonial Administration under the Duke of Newcastle; Evolution and Revolution: American Society, 1600-1820; The Origins of American Capitalism; and an edited volume,Republicanism and Liberalism in America and the German States, 1750-1850. Recent publications include "Magistrates, Common Law Lawyers, Legislators: The Three Legal Systems of British America," inThe Cambridge History of Law in America and "Charles Evans Hughes and the Strange Death of Liberal America," in Law and History Review, derived from his ongoing research on the liberal state in America: New York, 1820-1975. During his career, Henretta taught at Sussex, Princeton, UCLA, and Boston University. He served as a Fulbright Senior Scholar in Australia and as the Harmsworth Professor of American History at Oxford University.

Eric Hinderaker is Professor of History and Director of Graduate Studies at the University of Utah. His research explores early modern imperialism, relations between Europeans and Native Americans, and comparative colonization. His publications includeThe Two Hendricks: Unraveling a Mohawk Mystery, which won the Dixon Ryan Fox Prize;Elusive Empires: Constructing Colonialism in the Ohio Valley, 1673-1800; and, with Peter C. Mancall,At the Edge of Empire: The Backcountry in British North America. He is currently working on two books, one about the Boston Massacre and another, with Rebecca Horn, on patterns of European colonization in the Americas.Rebecca Edwards is a Professor of History at Vassar College. Her research interests focus on the post-Civil War era and include electoral politics, environmental history, and the history of women and gender roles. She is the author ofAngels in the Machinery: Gender in American Party Politics from the Civil War to the Progressive Era andNew Spirits: Americans in the "Gilded Age," 1865-1905. She is currently working on a biography of women's rights advocate and People's Party orator Mary E. Lease.Robert O. Self is Professor of History at Brown University. His research focuses on urban history, American politics, and the post-1945 United States. He is the author ofAmerican Babylon: Race and the Struggle for Postwar Oakland, which won four professional prizes, including the James A. Rawley Prize from the Organization of American Historians, andAll in the Family: The Realignment of American Democracy Since the 1960s. He is currently at work on a book about the centrality of houses, cars, and children to family consumption in the twentieth-century United States. He teaches courses on the postwar United States; the history of political movements; the history of gender, sex, and the family; and urban history.