Items related to The American Promise: A Concise History, Volume 1:...

The American Promise: A Concise History, Volume 1: To 1877 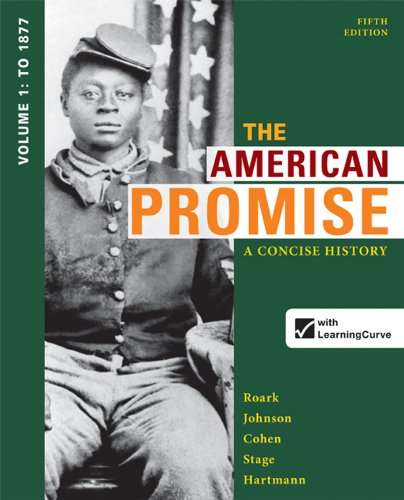 The American Promise: A Concise History is a brief, inexpensive narrative with a clear political, chronological narrative that makes teaching and learning American history a snap. Streamlined by the authors themselves to create a truly concise book, the fifth edition is nearly 15 percent shorter than the fourth compact edition, yet it includes more primary sources than ever—including a new visual sources feature. It is also enhanced by LearningCurve, our easy-to-assign adaptive learning system that will ensure students come to class prepared. What's in the LaunchPad

JAMES L. ROARK
Born in Eunice, Louisiana, and raised in the West, James L. Roark received his B.A. from the University of California, Davis, and his Ph.D. from Stanford University. His dissertation won the Allan Nevins Prize. Since 1983, he has taught at Emory University, where he is Samuel Candler Dobbs Professor of American History. In 1993, he received the Emory Williams Distinguished Teaching Award, and in 2001–2002 he was Pitt Professor of American Institutions at Cambridge University. He has writtenMasters without Slaves: Southern Planters in the Civil War and Reconstruction (1977). With Michael P. Johnson, he is author ofBlack Masters: A Free Family of Color in the Old South (1984) and editor ofNo Chariot Let Down: Charleston’s Free People of Color on the Eve of the Civil War (1984).MICHAEL P. JOHNSON
Born and raised in Ponca City, Oklahoma, Michael P. Johnson studied at Knox College in Galesburg, Illinois, where he received a B.A., and at Stanford University in Palo Alto, California, where he earned his Ph.D. He is currently professor of history at Johns Hopkins University in Baltimore. He is the author, co-author, or editor of six books, includingReading the American Past, the documents reader designed to accompany The American Promise. His research has been honored with fellowships from the National Endowment for the Humanties, the American Council of Learned Societies, the Center for Advanced Study in the Behavoral Sciences, and the Huntington Library, and with prizes from the Organization of American Historians and the Omohundro Insttute of Early American History and Culture. He is also the recipient of university prizes for outstanding undergraduate teaching.PATRICIA CLINE COHEN
Born in Ann Arbor, Michigan, and raised in Palo Alto, California, Patricia Cline Cohen earned a B.A. at the University of Chicago and a Ph.D. at the University of California, Berkeley. In 1976, she joined the history faculty at the University of California, Santa Barbara. In 2005–2006 she received the university’s Distinguished Teaching Award. Cohen has writtenA Calculating People: The Spread of Numeracy in Early America (1982; reissued 1999) andThe Murder of Helen Jewett: The Life and Death of a Prostitute in Nineteenth-Century New York (1998). She is coauthor ofThe Flash Press: Sporting Male Weeklies in 1840s New York (2008). In 2001–2002 she was the Distinguished Senior Mellon Fellow at the American Antiquarian Society.SARAH STAGE
Sarah Stage was born in Davenport, Iowa, and received a B.A. from the University of Iowa and a Ph.D. in American Studies from Yale University. She has taught U.S. history for more than twenty-five years at Williams College and the University of California, Riverside. Currently she is professor of Women’s Studies at Arizona State University at the West campus in Phoenix. Her books includeFemale Complaints: Lydia Pinkham and the Business of Women’s Medicine (1979) andRethinking Home Economics: Women and the History of a Profession (1997). She recently returned from China where she had an appointment as visiting scholar at Peking University and Sichuan University.SUSAN M. HARTMANN
Susan M. Hartmann received her B.A. from Washington University and her Ph.D. from the University of Missouri. A specialist in modern U.S. history and women’s history, she has published many articles and four books:Truman and the 80th Congress (1971); The Home Front and Beyond: American Women in the 1940s (1982);From Margin to Mainstream: American Women and Politics since 1960 (1989); andThe Other Feminists: Activists in the Liberal Establishment (1998). She is currently Arts and Humanities Distinguished Professor of History at Ohio State University and recently was