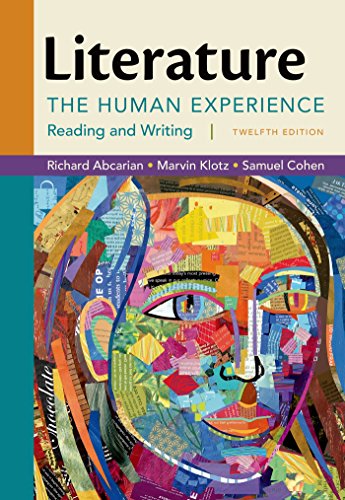 Now in its twelfth edition, Literature: The Human Experience provides a broad range of compelling fiction, poetry, drama, and nonfiction that explore the intersections and contradictions of human nature. Timeless themes such as innocence and experience, conformity and rebellion, culture and identity, love and hate, and life and death are presented through the context of connections and experiences that are enduringly human. By presenting diverse selections from contemporary and classic authors across time and cultures, students are certain to discover literature in this anthology with which they can connect.

Literature: The Human Experience is also designed to make teaching literature convenient for instructors and to make reading and writing about literature appealing for students.. A flexible arrangement of literature within each theme allows instructors to teach the text however best suits their classrooms, and the expert instruction and exciting selections will help to guide and entice even the most reluctant readers. Enhancements to the twelfth edition include four new casebooks—one per genre—that help students to see how literature can make arguments as well as new reading questions that ask students to make arguments about the selections. To top it off, Literature: The Human Experience costs about $10 to $30 less than comparable anthologies, providing a wealth of material for an affordable price.

Richard Abcarian (PhD, University of California, Berkeley) is a professor of English emeritus at California State University, Northridge, where he taught for thirty-seven years. During his teaching career, he won two Fulbright professorships. In addition to editing Literature: The Human Experience and its compact edition, he is the editor of a critical edition of Richard Wright's A Native Son, as well as several other literature textbooks.

Marvin Klotz (PhD, New York University) was a professor of English emeritus at California State University, Northridge, where he taught for thirty-three years and won Northridge's distinguished teaching award in 1983. He was also the winner of two Fulbright professorships (in Vietnam and Iran) and was a National Endowment for the Arts Summer Fellow twice. In addition to editing Literature: The Human Experience and several other textbooks, he coauthored a guide and index to the characters in Faulkner's fiction.

Samuel Cohen (PhD, City University of New York) is Associate Professor of English and Director of Graduate Studies at the University of Missouri. He is the author of After the End of History: American Fiction in the 1990s (University of Iowa Press, 2009), coeditor (with Lee Konstantinou) of The Legacy of David Foster Wallace (University of Iowa Press, 2012), Series Editor of The New American Canon: The Iowa Series in Contemporary Literature and Culture, and coeditor of JMMLA. He has also been published in such journals as Novel, Clio, Twentieth-Century Literature, The Journal of Basic Writing, and Dialogue: A Journal for Writing Specialists. For Bedford/St. Martin's, he is author of 50 Essays: A Portable Anthology and coauthor of Literature: The Human Experience.