Items related to A Pitying of Doves: A Birder Murder Mystery

Burrows, Steve A Pitying of Doves: A Birder Murder Mystery

A Pitying of Doves: A Birder Murder Mystery 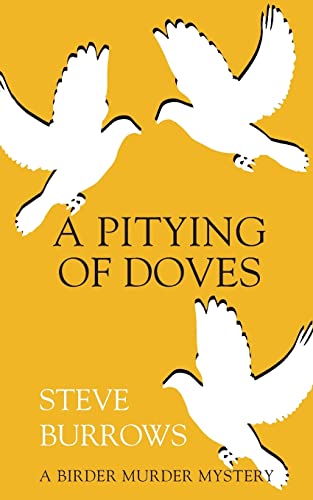 With murder, everyone pays a price ...

Why would a killer ignore expensive jewellery and take a pair of turtledoves as the only bounty?

This is only one of the questions that piques Chief Inspector Domenic Jejeune’s interest after a senior attaché with the Mexican Consulate is found murdered alongside the director of a local bird sanctuary. The fact that the director’s death has opened up a full-time research position studying birds hasn’t eluded Jejeune either. Could this be the escape from policing that the celebrated detective has been seeking? Even if it is, Jejeune knows he owes it to the victims to solve the case first. But a trail that weaves from embittered aviary owners to suspicious bird sculptors only seems to be leading him farther from the truth. Meanwhile, Jejeune is discovering that diplomatic co-operation and diplomatic pressure go hand in hand.

With two careers hanging in the balance, the stakes have never been higher for Inspector Jejeune. And this time, even bringing a killer to justice may not provide the closure he’s looking for.

Steve Burrows has pursued his birdwatching hobby on five continents. He is a former editor of the Hong Kong Bird Watching Society Magazine and a contributing field editor for Asian Geographic. Steve now lives in Oshawa, Ontario.

A cleverly written novel that proves A Siege of Bitterns wasn’t just an offbeat one-off. This blend of procedural and cozy is just right for followers of M. C. Beaton’s Hamish Macbeth. (Booklist)

[T]his second book in the birder mystery series is sure to delight. (Halifax Chronicle Herald)

This second mystery is as engaging as the first. (London Free Press)

... a fun, smart and satisfying read just like its predecessor. (Picklemethis.com)

A murder plot built around birdwatching doesn’t, at first, seem plausible or even possible. But Oshawa author Burrows pulls it off in a dazzling debut novel sure to make the shortlist for next year’s Arthur Ellis. . . Riveting from first page to final line. (Globe and Mail, for A Siege of Bitterns)

Filled with clues, dead ends . . . and blinding moments of 'Eureka!' (Sun-Times, for A Siege of Bitterns)

Finally, a solid, well-constructed murder mystery that happens to involve a subject with which many mystery readers might not be familiar. (Booklist, for A Siege of Bitterns)

1. A Pitying of Doves: A Birder Murder Mystery