Items related to Flight of the Goddess

Flight of the Goddess 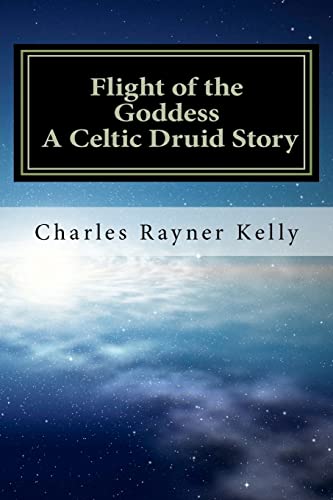 The author comes from Celtic roots and has long felt an affinity for his heritage. This led to interest in druids, and this novel is his way of telling what he found. His other books include: LITTLE POOR MAN The Story of St. Francis of Assisi KEEPER OF THE SACRED PIPE TRIBAL ALLIANCE BLACK ROBE THE HOWLS OF WOLF CREEK

1. Flight of the Goddess : A Celtic Druid Story

2. Flight of the Goddess (Paperback)

Book Description Createspace Independent Publishing Platform, United States, 2011. Paperback. Condition: New. Language: English. Brand new Book. An ancient manuscript has been found in Britain where the druids were known to be educated, a place they called Mona, which today is called Anglesey. The parchments tell of the embattled Gauls, defending their homelands from Roman invaders. The writer is Master Luteric, an oak-sage druid and member of Aes Dana, the Order of the Wise. He tells in the manuscript about what is happening to his people. Julius Caesar threatens to subjugate them and make Gaul a colony of Rome. The Celtic people of Gaul are fighting to survive. Luteric tells of accompanying Lord Amergin to Gaul, as emissary of the high druidic council on Mona. Amergin goes there to learn firsthand what is happening. The news he hears is disturbing. Caesar is intent upon destroying druidry. Deirdre is a student-druidess, and we read of her strange calling into the Order of the Wise, despite being the untutored waif of a town drunkard. We follow her to Sena, island home of female Aes Dana, where over two hundred student druidesses are educated. Before they receive their druidic staffs, the young women have one year of Novitiate, six years of Bardic College, seven years in the College for Ovates and Seers, and seven years more of specialized druidic training. The youngest fully formed ban-drui is thirty-three years old. Deirdre is far behind her fourteen classmates, who are better educated. She is about to be expelled from the Isle of Sena by Mistress Grian, but for the intervention of the archdruidess. Deirdre barely graduates and moves to the College of Bards. There she and her classmates, now whittled to ten, ponder the arcane lessons of their druidess teachers. "The purpose of the Bardic College," said Mistress Sualtaim of the Sweet Tune, "is to educate you to love and appreciate the spoken word. You're to use your words either to praise, instruct or inspire. Otherwise, shut up!" Luteric's manuscript recounts the legend of Uxellodunum, where a goddess leads a Celtic tribe from their homelands on the Danube into southern Gaul. The goddess is Uxella, sister of Arnemetia and Coventina, the Triune Goddess. She creates a spring with abundant water on a rocky plateau which is a natural fortress against enemies. Luteric and Deirdre and Lord Amergin go to Uxellodunum and attend the high druidic council of Gaul. The council must decide if it should go into exile or face the possibility of being captured by the Romans. Archdruid Cathbad is convinced it should go, while Archdruidess Eamain wants it to stay. Half of the council members elect to leave. Luteric and Deirdre realize that they love one another. They come from the same town in Ireland and their deceased mothers were close friends. Lord Amergin acts as a matchmaker, although they cannot marry until they have completed their druidic studies. When she returns to the Isle of Sena, Deirdre finds herself behind. She is helped by Pressina and Fidelma, her closest friends, but is shaken when the new archdruidess is Grian, the former novice mistress, who still wants to expel her from the Order of the Wise. The archdruidess takes Deirdre with her to Uxellodunum, accompanied by Lord Amergin and Luteric, unaware that it has become the last rallying point for the beleaguered Gauls. While they are visiting, the Roman army appears at its gates. Grian is killed when they try to escape, and Lord Amergin is badly hurt. Luteric and Deirdre have only each other, while Uxellodunum has only the Goddess Uxella to rely upon. As long as her spring of water endures, they can hold out indefinitely against the army. Then a traitor is found among the council members. This novel is based upon the eighth chapter of Julius Caesar's Gallic War Commentaries. How the Roman conqueror eventually subdues Uxellodunum is the story's surprising end. Seller Inventory # APC9781460980576

3. Flight of the Goddess

4. Flight of the Goddess: A Celtic Druid Story

5. Flight of the Goddess : A Celtic Druid Story

6. Flight of the Goddess

7. Flight of the Goddess