Items related to Loose-leaf Version for Modern Principles of Macroeconomics 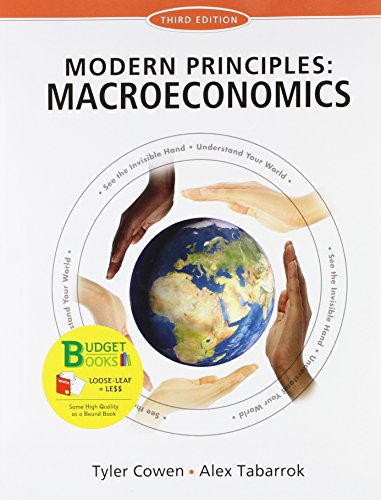 Engaging and provocative writing, as well as a knack for revealing the “invisible hand” of economics at work have made Cowen and Tabarrok’s Modern Principles of Economics  a singularly distinctive and effective textbook for the principles  course.The thoroughly updated new edition of Modern Principles again draws on a wealth of captivating applications to show readers how economics shed light on business, politics, world affairs, and everyday life just as the authors do in their wildly successful blog, marginalrevolution.com.

Pioneers in teaching economics online, the authors have created a series of videos that are clever, to the point, and will help students better understand key economic concepts. These breakthrough videos are integrated in a dedicated version of Worth’s new online course space, LaunchPad.

Tyler Cowen is Holbert C. Harris Professor of Economics at George Mason University and Director of the Mercatus Center and the James M. Buchanan Center for Political Economy. He is published widely in economics journals, including the American Economic Review and Journal of Political Economy. With Alex Tabarrok he co-writes the Marginal Revolution blog, often ranked as the #1 economics blog. He is also the author of Discover Your Inner Economist (Dutton, 2007) and numerous other books on economics. He writes regularly for the popular press on economics, including for The New York Times, The Washington Post, Forbes, and The Wilson Quarterly. University web page: http: //economics.gmu.edu/faculty/tcowen.html WATCH: Tyler Cowen at the Economic Bloggers Forum.Alex Tabarrok is Bartley J. Madden Chair in Economics at the Mercatus Center at George Mason University and director of research for The Independent Institute. Tabarrok is co-author with Tyler Cowen of the popular economics blog, Marginal Revolution. His recent research looks at bounty hunters, judicial incentives and elections, crime control, patent reform, methods to increase the supply of human organs for transplant, and the regulation of pharmaceuticals. He is the editor of the books, Entrepreneurial Economics: Bright Ideas from the Dismal Science; The Voluntary City: Choice, Community, and Civil Society; and Changing the Guard Private Prisons and The Control of Crime. His papers have appeared in the Journal of Law and Economics, Public Choice, Economic Inquiry, Journal of Health Economics, Journal of Theoretical Politics, The American Law and Economics Review, Kyklos and many other journals. His popular articles have appeared in The New York Times, The Wall Street Journal, and many other magazines and newspapers."