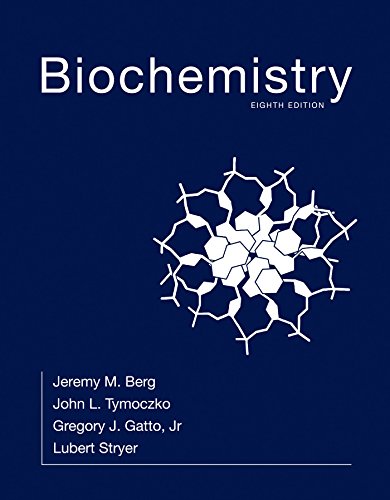 For four decades, this extraordinary textbook played an pivotal role in the way biochemistry is taught, offering exceptionally clear writing, innovative graphics, coverage of the latest research techniques and advances, and a signature emphasis on physiological and medical relevance. Those defining features are at the heart of this edition.

See what's in the LaunchPad

JEREMY M. BERG received his B.S. and M.S. degrees in Chemistry from Stanford (where he did research with Keith Hodgson and Lubert Stryer) and his Ph.D. in Chemistry from Harvard with Richard Holm. He then completed a postdoctoral fellowship with Carl Pabo in Biophysics at Johns Hopkins University School of Medicine. He was an Assistant Professor in the Department of Chemistry at Johns Hopkins from 1986 to 1990. He then moved to Johns Hopkins University School of Medicine as Professor and Director of the Department of Biophysics and Biophysical Chemistry, where he remained until 2003. He then became Director of the National Institute of General Medical Sciences at the National Institutes of Health. In 2011, he moved to the University of Pittsburgh where he is now Professor of Computational and Systems Biology and Pittsburgh Foundation Chair and Director of the Institute for Personalized Medicine. He served as President of the American Society for Biochemistry and Molecular Biology from 2011-2013. He is a Fellow of the American Association for the Advancement of Science and a member of the Institute of Medicine of the National Academy of Sciences. He received the American Chemical Society Award in Pure Chemistry (1994) and the Eli Lilly Award for Fundamental Research in Biological Chemistry (1995), was named Maryland Outstanding Young Scientist of the Year (1995), received the Harrison Howe Award (1997), and received public service awards from the Biophysical Society, the American Society for Biochemistry and Molecular Biology, the American Chemical Society, and the American Society for Cell Biology. He also received numerous teaching awards, including the W. Barry Wood Teaching Award (selected by medical students), the Graduate Student Teaching Award, and the Professor s Teaching Award for the Preclinical Sciences. He is coauthor, with Stephen J. Lippard, of the textbook Principles of Bioinorganic Chemistry.

John L. Tymoczko is Towsley Professor of Biology at Carleton College, where he has taught since 1976. He currently teaches Biochemistry, the Metabolic Basis
of Human Disease, Oncogenes and the Molecular Biology of Cancer, and Exercise Biochemistry and co-teaches an introductory course, Energy Flow in Biological
Systems. Professor Tymoczko received his B.A. from the University in Chicago in 1970 and his Ph.D. in Biochemistry from the University of Chicago with
Shutsung Liao at the Ben May Institute for Cancer Research in 1973. He then held a postdoctoral position with Hewson Swift of the Department of Biology at
the University of Chicago. The focus of his research has been on steroid receptors, ribonucleoprotein particles, and proteolytic processing enzymes. Gregory J. Gatto, Jr., received his A.B. degree in chemistry from Princeton University, where he worked with Martin F. Semmelhack and was awarded the Everett S. Wallis Prize in Organic Chemistry. In 2003, he received his M.D. and Ph.D. degrees from the Johns Hopkins University School of Medicine, where he studied the structural biology of peroxisomal targeting signal recognition with Jeremy M. Berg and received the Michael A. Shanoff Young Investigator Research Award. He then completed a postdoctoral fellowship in 2006 with Christopher T. Walsh at Harvard Medical School, where he studied the biosynthesis of the macrolide immunosuppressants. He is currently a Senior Scientific Investigator in the Heart Failure Discovery Performance Unit at GlaxoSmithKline. Lubert Stryer is Winzer Professor of Cell Biology, Emeritus, in the School of Medicine and Professor of Neurobiology, Emeritus, at Stanford University,
where he has been on the faculty since 1976. He received his M.D. from Harvard Medical School. Professor Stryer has received many awards for his research on the
interplay of light and life, including the Eli Lilly Award for Fundamental Research in Biological Chemistry, the Distinguished Inventors Award of the Intellectual
Property Owners Association, and election to the National Academy of Sciences and the American Philosophical Society. He was awarded the National Medal
of Science in 2006. The publication of his first edition of Biochemistry in 1975 transformed the teaching of biochemistry."

Shipping: US$ 30.12
From United Kingdom to U.S.A.
Destination, rates & speeds