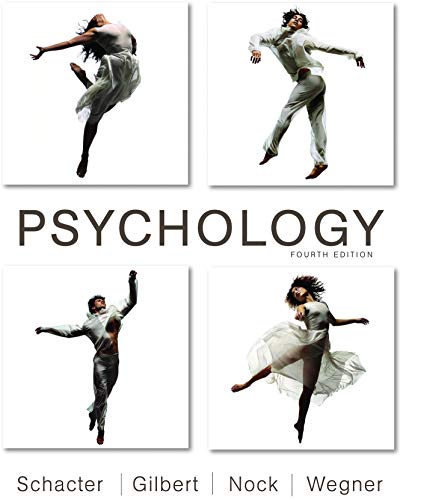 Through unique stories, memorable examples, and lots of humor, Psychology draws you into the subject's main themes in an engaging way to increase comprehension.

Daniel Schacter is William R. Kenan, Jr. Professor of Psychology at Harvard University. Dan received his B.A. degree from the University of North Carolina at Chapel Hill. He subsequently developed a keen interest in amnesic disorders associated with various kinds of brain damage. He continued his research and education at the University of Toronto, where he received his Ph.D. in 1981. He taught on the faculty at Toronto for the next six years before joining the psychology department at the University of Arizona in 1987. In 1991, he joined the faculty at Harvard University. His research explores the relation between conscious and unconscious forms of memory, the nature of distortions and errors in remembering, and how we use memory to imagine future events. Many of Schacter's studies are summarized in his 1996 book, Searching for Memory: The Brain, The Mind, and The Past, and his 2001 book, The Seven Sins of Memory: How the Mind Forgets and Remembers, both winners of the APA's William James Book Award. Schacter has also received a number of awards for teaching and research, including the Harvard-Radcliffe Phi Beta Kappa Teaching Prize, the Warren Medal from the Society of Experimental Psychologists, and the Award for Distinguished Scientific Contributions from the American Psychological Association. In 2013, he was elected to the National Academy of Sciences.

Daniel Gilbert is Edgar Pierce Professor of Psychology at Harvard University. After attending the Community College of Denver and completing his B.A. from the University of Colorado, Denver, he went on to earn his Ph.D. from Princeton University. From 1985 to 1996, he taught at the University of Texas, Austin, and in 1996, he joined the faculty of Harvard University. He has received the American Psychological Association's Distinguished Scientific Award for an Early Career Contribution to Psychology, the Diener Award for Outstanding Contributions to Social Psychology, and has won teaching awards that include the Phi Beta Kappa Teaching Prize and the Harvard College Professorship. His research focuses on how and how well people think about their emotional reactions to future events. He is the author of the international best seller Stumbling on Happiness, which won the Royal Society's General Prize for best popular science book of the year, and he is the co-writer and host of the PBS television series, This Emotional Life.

Matthew Nock is a Professor of Psychology at Harvard University. Matt received his B.A. from Boston University (1995) and his Ph.D. from Yale University (2003), and he completed his clinical internship at Bellevue Hospital and the New York University Child Study Center (2003). Matt joined the faculty of Harvard University in 2003 and has been there ever since. While an undergraduate, Matt became very interested in the question of why people do things to intentionally harm themselves, and he has been conducting research aimed at answering this question ever since. His research is multidisciplinary in nature and uses a range of methodological approaches (e.g., epidemiologic surveys, laboratory-based experiments, and clinic-based studies) to better understand how these behaviors develop, how to predict them, and how to prevent their occurrence. He has received multiple teaching awards at Harvard and also four early career awards recognizing his research, and in 2011, he was named a MacArthur Fellow.

Daniel Wegner was the John Lindsley Professor of Psychology in Memory of William James at Harvard University. He received his B.S. in 1970 and Ph.D. in 1974, both from Michigan State University. He began his teaching career at Trinity University in San Antonio, Texas, before his appointments at the University of Virginia in 1990 and then Harvard University in 2000. He was a Fellow of the American Academy of Arts and Sciences, and the recipient of the William James Award from the Association for Psychological Science, the Award for Distinguished Scientific Contributions from the American Psychological Association, and the Distinguished Scientist Award from the Society of Experimental Social Psychology. His research focused on thought suppression and mental control, transactive memory in relationships and groups, and the experience of conscious will. His work on thought suppression and consciousness served as the basis of two popular books, White Bears and Other Unwanted Thoughts and the Illusion of Conscious Will, both of which were named Choice Outstanding Academic Books. He died in 2013."

Book Description Condition: new. Brand new US edition. If it comes with a code, the code will be included *We are unable to ship internationally*. Seller Inventory # auto-3133n