Items related to The Disney Book: A Celebration of the World of Disney

Fanning, Jim The Disney Book: A Celebration of the World of Disney

The Disney Book: A Celebration of the World of Disney 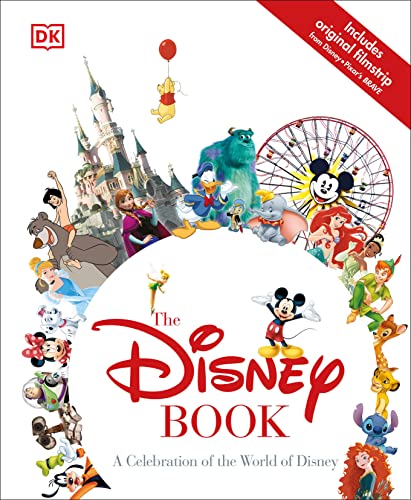 Celebrate movie history and the world of Disney, from the animations and live action movies to the magical Disney parks and attractions, with The Disney Book.

Go behind-the-scenes of Disney's best-loved animated movies and find out how they were made, follow Disney's entire history using the timeline, and marvel at beautiful concept art and story sketches.

Perfect for Disney fans who want to know everything about the magical Disney world, The Disney Book delves into their incredible archives and lets readers explore classic Disney animated and live action movies, wonder at fascinating Disney collectibles and even see original story sketches from Disney films.

Jim Fanning is an internationally published writer, historian, editor, lecturer and researcher specializing in Disney. In a career dedicated to celebrating and exploring the work and life of Walt Disney and his colleagues, as well as those who carry on their creative legacy, Jim has authored books, magazine articles, online pieces, TV documentaries, comics and more. Covering everything from Mickey Mouse to the Frozen phenomenon, Jim has written on all aspects of the Disney oeuvre, from animation and theme parks to live-action films and television to publications and merchandise. A regular contributor to Disney twenty-three Magazine, the magazine of D23, the official Disney Fan Club, and the D23 website, as well as Disney Fan, published in Japan, he has written officially commissioned projects for many departments of The Walt Disney Company. In addition to editing and serving as head writer and image researcher for Sketches, the Official Magazine of the Walt Disney Collectors Society for much of its almost two decade run, Jim has been editor, head writer and image researcher for two popular weekly periodicals published in Japan, Disney Dream File and Disney Parade. Jim also has contributed writing and research to the Walt Disney Family Museum in San Francisco.

Discover more about the works and career of Jim Fanning at jim-fanning.com.

Gr 5 Up—Prominently featuring images from the vaults of the Walt Disney Company, this vibrant and beautifully designed volume takes readers through the history of the corporation. Divided into three sections that focus on animation ("Drawn Disney"), live-action TV shows and movies ("Disney in Action"), and the theme parks ("Experience Disney"), the book presents the highlights, accentuating the positive: Mickey Mouse, the innovations that Disney made in animation, his pioneering forays into television, and more. The visuals are the stars here—film stills, black-and-white photos of artists at work, memorabilia—and those with an eye to animation will appreciate getting a look at early sketches of now-famous characters, as well as reproduced storyboards and maquettes. Behind-the-scenes information about beloved films and a peek at early technology such as the multiplane camera (used for filming animation) add to the appeal. This is a relentlessly upbeat look at the company that occasionally sacrifices precision in favor of a glossy presentation. At times, the text has the tone of marketing copy, and though the chronology mentions all of the films, those that weren't critical or commercial successes are skipped over. Similarly, the more unsavory moments (racially problematic scenes, Walt Disney's often authoritarian and controlling attitude, the company's World War II propaganda films) are omitted. Still, it's a visual treat that will easily attract readers. VERDICT While those seeking a balanced and in-depth look at Disney may wish to look elsewhere, browsers will enjoy this lighthearted and attractive addition.—Mahnaz Dar, School Library Journal

Book Description Hardcover. Condition: New. Hardcover. Shipping may be from multiple locations in the US or from the UK, depending on stock availability. 200 pages. 1.240. Seller Inventory # 9781465437877

3. The Disney Book: A Celebration of the World of Disney

4. The Disney Book: A Celebration of the World of Disney (Hardback)

6. The Disney Book: A Celebration of the World of Disney (Hardback)

Book Description DK Publishing (Dorling Kindersley) October 2015, 2015. Hardcover. Condition: New. 'The Disney Book' is a beautiful, visual exploration of all things Disney from the animated and live-action movies to the theme parks and attractions that have made Disney the beloved brand it is today. This classic DK-style book is packed with stunning visuals including concept art, original story sketches, merchandise, a range of movie posters, and collectibles. Explore rarely seen treasures including props, art, early merchandise, and more from Disney's extensive archives and celebrate more than 90 years of Disney storytelling and entertainment with 'The Disney Book.' (c) 2015 Disney. Seller Inventory # 195508

8. The Disney Book: A Celebration of the World of Disney

9. The Disney Book: A Celebration of the World of Disney

10. The Disney Book: A Celebration of the World of Disney