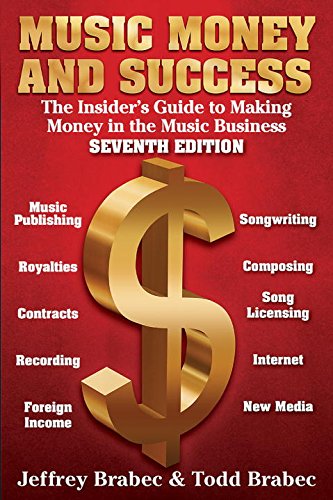 Music, Money and Success: The Insider's Guide to Making Money in the Music Business is the industry bible and the ultimate guide to making money in the music business. Music is a business of money, contracts, decisions and making the most of every opportunity. To succeed?to make money and have a career?you have to know what you are doing in both music and business. This invaluable book tells you how the business works, what you must know to succeed, and how much money you can make in films, television, video games, ASCAP, BMI and SESAC, record sales, downloads and streams, advertising, ringtones and ringbacks, interactive toys and dolls, Broadway, new media, scoring contracts and synch licenses, music publishing, foreign countries and much more. This indispensable reference is written by industry insiders Todd Brabec, Educator, Entertainment Law Attorney and former ASCAP Executive Vice President and Worldwide Director of Membership, and Jeff Brabec, Vice President of Business Affairs, Chrysalis Music Publishing.

Todd Brabec, former ASCAP Executive Vice President and Worldwide Director of Membership, is an entertainment law attorney and industry consultant, a Deems Taylor Award–winning co-author of the best-selling music business book Music, Money, and Success: the Insiders Guide to Making Money in the Music Business, now in its eighth edition (Schirmer Trade Books/Music Sales) as well as co-author of the “Music Publishing” chapter in the 2018 Juris Publications multiple-volume treatise The Essential Guide to Entertainment Law. He is an adjunct professor at USC where he teaches music licensing, music publishing, film, television, and video game scoring, and song contracts, and a former Governing Committee member as well as Music and Budget Chair of the American Bar Association Forum on the Entertainment and Sports Industries. In addition to the Deems Taylor Award for Excellence in Music Journalism, he is the recipient of the 2005 Educational Leadership Award from the Music & Entertainment Industry Educators Association (MEIEA) and the 2015 Texas Star Award from the Entertainment and Sports Law Section of the State Bar of Texas for Outstanding Contribution and Achievement in the Field of Entertainment Law. During his 37-year ASCAP career in addition to overseeing and directing all of ASCAP’s membership operations in the Los Angeles, New York, Nashville, Miami, Chicago, London, and Puerto Rico offices, he was responsible for signing most of ASCAP’s successful songwriter/artists including, among many others, Marvin Gaye, Metallica, Journey, Neil Young, Smokey Robinson, Tom Petty, Sting, James Taylor, Joni Mitchell, the Jimi Hendrix catalogue, ZZ Top, War, Green Day, Jay Z, Bryan Adams, Jeff Lynne (ELO), Steely Dan, Fergie, Donna Summer, Mötley Crüe, Avril Lavigne, Supertramp, Foreigner, Marc Anthony, Bob McDill, America, John Prine, Sting, Rob Thomas and Earth, Wind & Fire as well as the worldwide top-grossing box office feature film score composers James Horner (Avatar and Titanic—#1 and #2 all-time box office films), Alan Silvestri (Marvel’s The Avengers), Hans Zimmer (Pirates of the Caribbean films), James Newton Howard (Hunger Games, Dark Knight) and Randy Newman (Toy Story 1, 2, and 3 films) in addition to many of the top television series score composers and theme song writers. His efforts over his career were instrumental in taking ASCAP from a 20% overall market share to a 52% share of radio and competitive dominance in broadcast television, cable, and worldwide top-grossing feature films as well as an increase in total annual revenue from $60 million to $995 million. In addition, he significantly changed most of ASCAP’s distribution, payment, and survey rules and systems and was responsible for significantly increasing the royalties and payment formulas for successful radio writers and film and television score and theme composers as well as eliminating practically all ASCAP payment and distribution policies, formulas, and rules that were not in the best interests of songwriters and composers or which had a negative effect on their earnings or which financially penalized success. In addition, he was in charge of and responsible for all writer and publisher advances, guarantees, bank loans, financial incentives, and other member inducements. Past and current board memberships include the L.A. chapter of NARAS (the Recording Academy), the Association of Independent Music Publishers (AIMP), Entertainment Law & Finance, American Bar Association Forum on the Entertainment and Sports Industries (Governing Committee as well as Music and Budget Chairs), Academy of Country Music (ACM) and the California Copyright Conference (CCC), among others. Jeff Brabec is Vice President of Business Affairs for BMG (representing, among others, the catalogues of Bruno Mars, John Legend, Kurt Cobain, Roger Waters, ZZ Top, OutKast, Buddy Holly, David Bowie, Chuck Berry, Bo Diddley, My Morning Jacket, John Lee Hooker, Devo, Hal David, Blondie, Paul Anka,

“Career Insurance for Songwriters. Everything songwriters, composers, and music publishers need to know about making a living in the Digital Age.”
- AMERICAN SOCIETY OF COMPOSERS, AUTHORS AND PUBLISHERS

“How Not to Get Screwed By the Music Industry. You must not live without this book.”
- Vibe Magazine

1. Music Money and Success 7th Edition: The Insider's Guide to Making Money in the Music Business