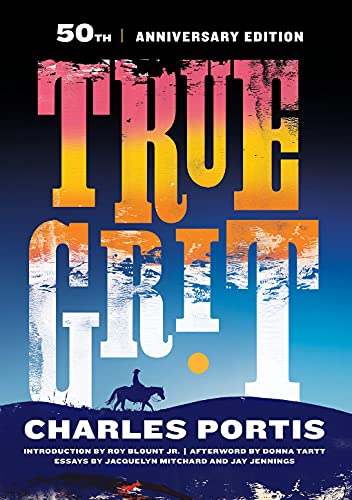 The most famous novel by Charles Portis, True Grit is a rousing frontier adventure tale in which fourteen-year-old Mattie Ross seeks to avenge her father’s murder by the coward Tom Chaney with the aid of the mean and one-eyed US marshal named Rooster Cogburn. A finely crafted novel brimming with mastery, humor, and epic sweep, it’s no surprise it’s a favorite of writers as wide ranging as Mary Roach and Anthony Bourdain to Jonathan Lethem and Bob Odenkirk. The book has inspired two award-winning films―the original version and the wildly acclaimed remake by Joel and Ethan Coen―and Overlook’s movie tie-in edition to the Coen brothers’ film went on to become a #1 New York Times bestseller.Now, to mark the 50th anniversary of the publication of this true American classic, Overlook is releasing a glorious new edition of True Grit in a deluxe flapped paperback format featuring specially-commissioned cover artwork. With new critical essays on Portis and his seminal work by New York Times bestselling author Jacquelyn Mitchard and writer Jay Jennings, editor of the collection Escape Velocity: A Charles Portis Miscellany, also published by Overlook; an insightful introduction by Roy Blount, Jr., acclaimed author and friend to Charles Portis; and an afterword by Donna Tartt, this anniversary edition of True Grit is the ultimate celebration of an American classic.

Charles Portis lives in Arkansas, where he was born and educated. He served in the Marine Corps during the Korean War, was the London bureau chief of the New York Herald-Tribune, and was a writer for The New Yorker.

Jay Jennings is a freelance writer whose journalism, book reviews and humor have appeared in many national magazines and newspapers, including the New York Times, the Wall Street Journal, the Los Angeles Times, the Oxford American, and Travel & Leisure. He is a regular contributor to the New York Times Book Review and the San Francisco Chronicle.

Jacquelyn Mitchard is the author of the bestselling novel The Deep End of the Ocean and of two nonfiction books, including Mother Less Child: The Love Story of a Family. She has been featured on NBC's Today Show and CBS This Morning, and has been profiled in such national publications as People and Newsweek. A contributing editor to Ladies' Home Journal, Mitchard and her five children live in Madison, Wisconsin.

“I love [True Grit] so much, and the thought that I was going to get to reread it made me happy. And now that I actually am rereading it, it’s just such a pleasure.”
- Michael Chabon, author of The Adventures of Kavalier & Clay, Globe and Mail

“Charles Portis’s True Grit is a masterpiece. Don’t settle for seeing the film versions. One of the great heroines of all time and a magnificent book filled with great dialogue.”
- Anthony Bourdain, “By the Book,” The New York Times

“Portis is an amazingly beautiful and lyrical literary novelist. True Grit the book will put John Wayne out of your head; it has really beautiful, amazing writing and incredible characters.”
- Mary Roach, The AV Club

“An instant classic. Read it and have the most fun you've had reading a novel in years, maybe decades.”
- Newsday

“It is exciting, funny, and moving. It is, quite simply, an American masterpiece.”
- Boston Globe