Items related to STASIS: Civil War as a Political Paradigm 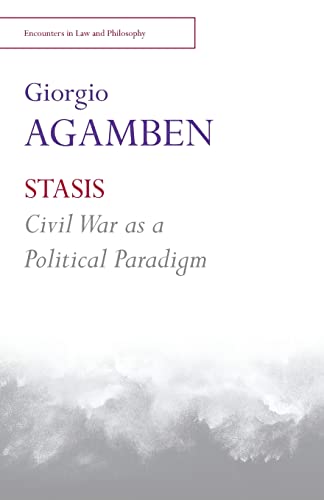 In this inaugural volume of the Edinburgh Encounters in Law and Philosophy series, Giorgio Agamben focuses upon the on-going warfare European state power has waged against its most malignant enemy: civil war itself.

The survival of the State is seen to depend on its ability to preserve the political community from factional enmity. Agamben first investigates the Athenian theme of 'Stasis' - the city's struggle against internal revolt - before turning to a new reading of Hobbes's Leviathan and its approach to the peril of the commonwealth's exposure to civil strife, division and revolution.

At the heart of this book is the issue of state powers in their continuous decline - an issue that is key to the renewal of political, philosophical and legal thought.

Giorgio Agamben, an Italian philosopher, is one of the most renowned thinkers of our time. He taught at the IUAV University in Venice, Italy, and holds the Baruch Spinoza Chair at the European Graduate School in Saas-Fee, Wallis, Switzerland. He previously taught at the Collège International de Philosophie in Paris and at the University of Macerata in Italy. He is best known for his Homo Sacer series of publications interrogating the ideas of totalitarianism and biopolitics.

Nicholas Heron is a Postdoctoral Research Fellow in the Centre for the History of European Discourses at the University of Queensland. He is the editor, with Justin Clemens and Alex Murray, of The Work of Giorgio Agamben: Law, Literature, Life (Edinburgh University Press, 2008), and the author of a forthcoming monograph entitled Liturgical Power: Between Economic and Political Theology.

Buy Used
Condition: Very Good
Very Good: a copy that has been... Learn more about this copy

Book Description Edinburgh University Press, 2015. Paperback. Condition: Very Good. Very Good: a copy that has been read, but is in excellent condition. Pages are intact and not marred by notes or highlighting. The spine remains undamaged. Most items will be dispatched the same or the next working day. Seller Inventory # wbb0013773128

Shipping: US$ 10.23
From United Kingdom to U.S.A.
Destination, rates & speeds