Items related to A Man Called Ove: A Novel 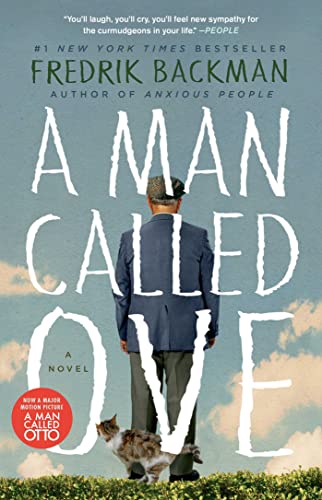 Read the New York Times bestseller that has taken the world by storm!

In this “charming debut” (People) from one of Sweden’s most successful authors, a grumpy yet loveable man finds his solitary world turned on its head when a boisterous young family moves in next door.

Meet Ove. He’s a curmudgeon—the kind of man who points at people he dislikes as if they were burglars caught outside his bedroom window. He has staunch principles, strict routines, and a short fuse. People call him “the bitter neighbor from hell.” But must Ove be bitter just because he doesn’t walk around with a smile plastered to his face all the time?

Behind the cranky exterior there is a story and a sadness. So when one November morning a chatty young couple with two chatty young daughters move in next door and accidentally flatten Ove’s mailbox, it is the lead-in to a comical and heartwarming tale of unkempt cats, unexpected friendship, and the ancient art of backing up a U-Haul. All of which will change one cranky old man and a local residents’ association to their very foundations.

A feel-good story in the spirit of The Unlikely Pilgrimage of Harold Fry and Major Pettigrew’s Last Stand, Fredrik Backman’s novel about the angry old man next door is a thoughtful exploration of the profound impact one life has on countless others. “If there was an award for ‘Most Charming Book of the Year,’ this first novel by a Swedish blogger-turned-overnight-sensation would win hands down” (Booklist, starred review).

Fredrik Backman is the #1 New York Times bestselling author of A Man Called Ove (soon to be a major motion picture starring Tom Hanks), My Grandmother Asked Me to Tell You She’s Sorry, Britt-Marie Was Here, Beartown, Us Against You, as well as two novellas, And Every Morning the Way Home Gets Longer and Longer and The Deal of a Lifetime. His books are published in more than forty countries. He lives in Stockholm, Sweden, with his wife and two children. Connect with him on Twitter @BackmanLand or on Instagram @backmansk.

He drives a Saab. He’s the kind of man who points at people he doesn’t like the look of, as if they were burglars and his forefinger a policeman’s flashlight. He stands at the counter of a shop where owners of Japanese cars come to purchase white cables. Ove eyes the sales assistant for a long time before shaking a medium-sized white box at him.

The assistant, a young man with a single-digit body mass index, looks ill at ease. He visibly struggles to control his urge to snatch the box out of Ove’s hands.

Ove gives the box a skeptical glance, as if it’s a highly dubious sort of box, a box that rides a scooter and wears tracksuit pants and just called Ove “my friend” before offering to sell him a watch.

The sales assistant nods. Then hesitates and quickly shakes his head.

Ove looks at the sales assistant as if he has just spoken backwards, before shaking the box again.

Ove sighs and starts talking slowly, articulating his words as if the only problem here is his adversary’s impaired hearing.

The assistant scratches his chin.

Ove glares at him.

“I want a computer! A normal bloody computer!”

Silence descends over the two men for a short while. The assistant clears his throat.

The assistant stops and seems to be looking for a word that falls within the bounds of comprehension of the man facing him. Then he clears his throat again and says:

Ove shakes his head wildly and leans menacingly over the counter.

“A laptop is a computer.”

Ove, insulted, glares at him and stabs his forefinger at the counter.

“You think I don’t know that!”

Another silence, as if two gunmen have suddenly realized they have forgotten to bring their pistols. Ove looks at the box for a long time, as though he’s waiting for it to make a confession.

“Where does the keyboard pull out?” he mutters eventually.

The sales assistant rubs his palms against the edge of the counter and shifts his weight nervously from foot to foot, as young men employed in retail outlets often do when they begin to understand that something is going to take considerably more time than they had initially hoped.

“Well, this one doesn’t actually have a keyboard.”

Ove does something with his eyebrows. “Ah, of course,” he splutters. “Because you have to buy it as an ‘extra,’ don’t you?”

“No, what I mean is that the computer doesn’t have a separate keyboard. You control everything from the screen.”

Ove shakes his head in disbelief, as if he’s just witnessed the sales assistant walking around the counter and licking the glass-fronted display cabinet.

“But I have to have a keyboard. You do understand that?”

The young man sighs deeply, as if patiently counting to ten.

“A McBook?” Ove says, far from convinced. “Is that one of those blessed ‘eReaders’ everyone’s talking about?”

“Okay!” Ove hisses. He looks around the shop for a moment. “So are they any good, then?”

The sales assistant looks down at the counter in a way that seems to reveal a fiercely yet barely controlled desire to begin clawing his own face. Then he suddenly brightens, flashing an energetic smile.

“You know what? Let me see if my colleague has finished with his customer, so he can come and give you a demonstration.”

Ove checks his watch and grudgingly agrees, reminding the assistant that some people have better things to do than stand around all day waiting. The assistant gives him a quick nod, then disappears and comes back after a few moments with a colleague. The colleague looks very happy, as people do when they have not been working for a sufficient stretch of time as sales assistants.

Ove drills his police-flashlight finger into the counter.

“I want a computer!”

The colleague no longer looks quite as happy. He gives the first sales assistant an insinuating glance as if to say he’ll pay him back for this.

In the meantime the first sales assistant mutters, “I can’t take anymore, I’m going for lunch.”

“I’m sorry?” says the colleague and turns around.

“Lunch!” He sneers, then tosses the box onto the counter and swiftly walks out.