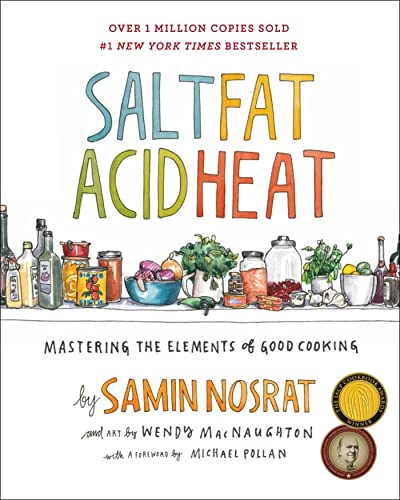 A visionary new master class in cooking that distills decades of professional experience into just four simple elements, from the woman declared “America’s next great cooking teacher” by Alice Waters.

In the tradition of The Joy of Cooking and How to Cook Everything comes Salt, Fat, Acid, Heat, an ambitious new approach to cooking by a major new culinary voice. Chef and writer Samin Nosrat has taught everyone from professional chefs to middle school kids to author Michael Pollan to cook using her revolutionary, yet simple, philosophy. Master the use of just four elements—Salt, which enhances flavor; Fat, which delivers flavor and generates texture; Acid, which balances flavor; and Heat, which ultimately determines the texture of food—and anything you cook will be delicious. By explaining the hows and whys of good cooking, Salt, Fat, Acid, Heat will teach and inspire a new generation of cooks how to confidently make better decisions in the kitchen and cook delicious meals with any ingredients, anywhere, at any time.

Featuring 150 illustrations and infographics that reveal an atlas to the world of flavor by renowned illustrator Wendy MacNaughton, Salt, Fat, Acid, Heat will be your compass in the kitchen. Destined to be a classic, it just might be the last cookbook you’ll ever need.

With a foreword by Michael Pollan.

Samin Nosrat is a writer, teacher, and chef. Called “a go-to resource for matching the correct techniques with the best ingredients” by The New York Times, and “the next Julia Child” by NPR’s All Things Considered, she’s been cooking professionally since 2000, when she first stumbled into the kitchen at Chez Panisse restaurant. She lives, cooks, surfs, and gardens in Berkeley, California. Salt, Fat, Acid, Heat is her first book.

Wendy MacNaughton is a New York Times bestselling illustrator and graphic journalist whose books include Meanwhile in San Francisco (Chronicle), Pen & Ink (Bloomsbury). The Gutsy Girl (Bloomsbury), and The Essential Scratch and Sniff Guide to Becoming a Wine Expert (Houghton Mifflin Harcourt). Her work appears in publications like The New York Times, Lucky Peach, Bon Appétit, AFAR Magazine, and elsewhere. She is the back page columnist for The California Sunday Magazine.

Salt, Fat, Acid, Heat
Growing up, I thought salt belonged in a shaker at the table, and nowhere else. I never added it to food, or saw Maman add it to food. When my aunt Ziba, who had a well-documented taste for salt, sprinkled it onto her saffron rice at the table each night, my brothers and I giggled. We thought it was the strangest, funniest thing in the world. “What on earth,” I wondered, “can salt do for food?”

I associated salt with the beach, where I spent my childhood seasoned with it. There were the endless hours in the Pacific, swallowing mouthful after mouthful of ocean water when I misjudged the waves. Tidepooling at twilight, my friends and I often fell victim to the saltwater spray while we poked at anemones. And my brothers, chasing me on the sand with giant kelp, would tickle and taunt me with its salty, otherworldly tassels whenever they caught up to me.

Maman always kept our swimsuits in the back of our blue Volvo station wagon, because the beach was always where we wanted to be. She was deft with the umbrella and blankets, setting them up while she shooed the three of us into the sea.

We’d stay in the water until we were starving, scanning the beach for the sun-faded coral-and-white umbrella, the only landmark that would lead us back to Maman. Wiping saltwater from our eyes, we beelined to her.

Somehow, Maman always knew exactly what would taste best when we emerged: Persian cucumbers topped with sheep’s milk feta cheese rolled together in lavash bread. We chased the sandwiches with handfuls of ice-cold grapes or wedges of watermelon to quench our thirst.

That snack, eaten while my curls dripped with seawater and salt crust formed on my skin, always tasted so good. Without a doubt, the pleasures of the beach added to the magic of the experience, but it wasn’t until many years later, working at Chez Panisse, that I understood why those bites had been so perfect from a culinary point of view.

While bussing tables during the first year I worked at Chez Panisse, the closest I usually got to the food was at tasters, when the cooks made each dish for the chef to critique before service. With a menu that changed daily, the chef needed tasters to ensure that his or her vision was realized. Everything had to be just right. The cooks would tinker and adjust until satisfied; then they’d hand over the dishes to the floor staff to taste. On the tiny back porch, a dozen of us would hover over the plates, passing them around until we’d all had a bite of everything. It was there that I first tasted crisp deep-fried quail, tender salmon grilled in a fig leaf, and buttermilk panna cotta with fragrant wild strawberries. Often, the powerful flavors would haunt me throughout my shift.

Once I developed culinary aspirations, Chris Lee, the chef who’d eventually take me under his wing, suggested that I pay less attention to what was happening on the porch during tasters, and more to what was happening in the kitchen. The language the chefs used, how they knew when something was right—these were clues about how to become a better cook. Most often, when a dish fell flat, the answer lay in adjusting the salt. Sometimes it was in the form of salt crystals, but other times it meant a grating of cheese, some pounded anchovies, a few olives, or a sprinkling of capers. I began to see that there is no better guide in the kitchen than thoughtful tasting, and that nothing is more important to taste thoughtfully for than salt.

One day the following year, as a young cook in the prep kitchen, I was tasked with cooking polenta. I’d tasted polenta only once before coming to Chez Panisse, and I wasn’t a fan. Precooked and wrapped in plastic like a roll of cookie dough, it was flavorless. But I’d promised myself that I would try everything at the restaurant at least once, and when I tasted polenta for the second time, I couldn’t believe that something so creamy and complex could share a name with that flavorless tube of astronaut food. Milled from an heirloom variety of corn, each bite of the polenta at Chez Panisse tasted of sweetness and earth. I couldn’t wait to cook some myself.

Once the chef, Cal Peternell, talked me through the steps of making the polenta, I began cooking. Consumed by the fear of scorching and ruining the entire humongous pot—a mistake I had seen other cooks make—I stirred maniacally.

After an hour and a half, I’d added in butter and Parmesan, just as Cal had instructed me. I brought him a spoonful of the creamy porridge to taste. At six foot four, Cal is a gentle giant with sandy-blond hair and the driest of wits. I looked expectantly up at him with equal parts respect and terror. He said, in his signature deadpan, “It needs more salt.” Dutifully, I returned to the pot and sprinkled in a few grains of salt, treating them with the preciousness I might afford, say, gold leaf. I thought it tasted pretty good, so I returned to Cal with a spoonful of my newly adjusted polenta.

Again, a moment’s consideration was all he needed to know the seasoning was off. But now—to save himself the trouble and time, I imagine—he marched me back to the pot and added not one but three enormous palmfuls of kosher salt.

The perfectionist in me was horrified. I had wanted so badly to do that polenta justice! The degree to which I’d been off was exponential. Three palmfuls!

Cal grabbed spoons and together we tasted. Some indescribable transformation had occurred. The corn was somehow sweeter, the butter richer. All of the flavors were more pronounced. I’d been certain Cal had ruined the pot and turned my polenta into a salt lick, but no matter how I tried, the word salty did not apply to what I tasted. All I felt was a satisfying zing! with each mouthful.

It was as if I’d been struck by lightning. It’d never occurred to me that salt was anything more than pepper’s sidekick. But now, having experienced the transformative power of salt for myself, I wanted to learn how to get that zing! every time I cooked. I thought about all of the foods I’d loved to eat growing up—and that bite of seaside cucumber and feta, in particular. I realized then why it had tasted so good. It was properly seasoned, with salt.