Items related to A Call to Action: Women, Religion, Violence, and Power

A Call to Action: Women, Religion, Violence, and Power 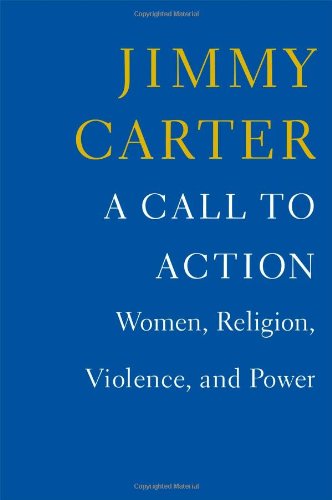 The world’s discrimination and violence against women and girls is the most serious, pervasive, and ignored violation of basic human rights: This is President Jimmy Carter’s call to action.

President Carter was encouraged to write this book by a wide coalition of leaders of all faiths. His urgent report covers a system of discrimination that extends to every nation. Women are deprived of equal opportunity in wealthier nations and “owned” by men in others, forced to suffer servitude, child marriage, and genital cutting. The most vulnerable, along with their children, are trapped in war and violence.

A Call to Action addresses the suffering inflicted upon women by a false interpretation of carefully selected religious texts and a growing tolerance of violence and warfare. Key verses are often omitted or quoted out of context by male religious leaders to exalt the status of men and exclude women. And in nations that accept or even glorify violence, this perceived inequality becomes the basis for abuse. President Carter and his wife, Rosalynn, have visited 145 countries, and The Carter Center has had active projects in more than half of them. Around the world, they have seen inequality rising rapidly with each passing decade. This is true in both rich and poor countries, and among the citizens within them.

Carter draws upon his own experiences and the testimony of courageous women from all regions and all major religions to demonstrate that women around the world, more than half of all human beings, are being denied equal rights. This is an informed and passionate charge about a devastating effect on economic prosperity and unconscionable human suffering. It affects us all.

Jimmy Carter was the thirty-ninth President of the United States, serving from 1977 to 1981. In 1982, he and his wife founded The Carter Center, a nonprofit organization dedicated to improving the lives of people around the world. Carter was awarded the Nobel Peace Prize in 2002. He is the author of thirty books, including A Full Life: Reflections at Ninety; A Call to Action: Women, Religion, Violence, and Power; An Hour Before Daylight: Memoirs of a Rural Boyhood; and Our Endangered Values: America’s Moral Crisis.

“A tour de force of the global abuse and manipulation of women, including statistics that will stun most readers with details that cannot be ignored...The scope of the material is astounding...Mr. Carter's A Call to Action should not only be required reading in America, but should also serve as the template for a complete reinterpretation of the religious views behind our treatment of each other, to discover what he claims is the true meaning behind the miracle of creation.” Source: Pittsburgh Post-Gazette

“A Call to Action reinforces his dedication to wiping out injustice—and his ability to move others to join his cause.” Source: St. Louis Post-Dispatch

“When reading A Call to Action, I got the sense that this is a man who has spent nine decades advocating for women and will continue to do so until his last breath. He is a man on a mission, listing 23 challenges he and The Carter Center are determined to work on for the betterment of women. He demonstrates how he used his influence throughout his lifetime to push women’s rights forward . . . Carter’s book overwhelms as well as inspires.” Source: Huffington Post

“Women’s studies scholars and readers interested in international human rights may find these accounts of discrimination and abuse disturbing but should be challenged to respond to Carter’s call for action.” Source: Library Journal

“A Call to Action ends with a list of recommendations to ameliorate the condition of women and girls worldwide, such as having more women in higher public office and involving religious scholars to give a more forward-looking interpretation to their faiths. It is this commitment to a progressive religious outlook that makes Carter almost a lone voice in U.S. politics.” Source: Progressive.org

“[Carter] wrote his book with deep knowledge, insight and compassion...Indeed, it is time to wake up.” Source: Morning Call (PA)

“A Call to Action enhances [Carter’s] role as elder statesman and human rights warrior by focusing entirely on the enslavement, degradation, and torture that women endure around the world. . . . an important book that should serve as a reference guide and instructional manual for dealing with the atrocities against women.” Source: The Daily Beast

1. A Call to Action: Women, Religion, Violence, and Power

2. A Call to Action: Women, Religion, Violence, and Power

Book Description New York, New York, U.S.A.: Simon & Schuster, 2014. Hardcover. Condition: New. Dust Jacket Condition: New. 1st Edition. Signed in person by former President Jimmy Carter directly on the title page. Not signed to anyone. Photos of President Carter at his book signing event, a copy of the signing event announcement and event ticket will be included with the signed book. 1st Edition, 1st printing with full number line: 10 9 8 7 6 5 4 3 2 1. Book is NEW and UNREAD, opened only for signing. No marks, no inscription. Not a book club edition, not ex-library. Dust jacket is new, not price-clipped, in a removable, protective clear cover. This is a beautiful autographed first edition for collectors. Makes a great gift!. Signed by Author(s). Seller Inventory # 000938