Items related to The Sword and the Dragon (Revised): The Wardstone Trilogy...

Mathias, M R The Sword and the Dragon (Revised): The Wardstone Trilogy (Volume 1)

The Sword and the Dragon (Revised): The Wardstone Trilogy (Volume 1) 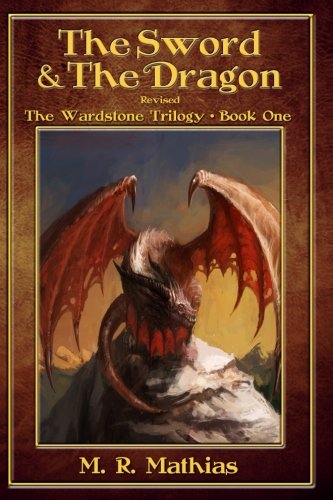 Read the reviews on this one, Jordan, Martin, and Hobbs, be wary. A new Fantasy Master has finally released his long written wares....

Deemed one of the top 10 indie Fantasy releases of 2010 by Fantasy Book Critic, and listed in the first ever Publishers Weekly Indie Select issue, this 235k word epic title was originally written in longhand in a Texas prison cell by M. R. Mathias.

The Sword and the Dragon

When the Royal Wizard of Westland poisons the king so that his puppet prince can take the throne and start a continental war, a young squire is forced to run for his life carrying a powerful sword his dying monarch burdened him with from his death bed.

Two brothers find a magic ring and start on paths to becoming the most powerful sort of enemies. Meanwhile an evil young sorceress unwillingly falls in love with one of them after he agrees to help her steal a dragon's egg for her father. Her father just happens to be the Royal Wizard, and despite his daughter's feelings, he would love nothing more than to sacrifice the boy!

All of these characters, along with the Wolf King of Wildermont, the Lion Lord of Westland, and a magical hawk named Talon, are on a collision course toward Willa the Witch Queen's palace in the distant kingdom of Highwander. There, the very bedrock is formed of the powerful magical substance called Wardstone.

Who are the heroes? And will they get there before the Royal Wizard and his evil horde does?

Whatever happens, the journey will be spectacular, and the confrontation will be cataclysmic.

The Adventurion - A YA sci-fi novel

Due to the fact that I couldn't get the map to appear clearly on a smaller screen, the Map of the Mainland Kingdoms is posted for your use at the Wardstone Homepage here: mrmathias.com

M.R. Mathias rose from unknown to award-winning, best-selling author at a pace most authors can only dream about. He is a prolific writer of epic fantasy novels, novellas, and short stories. Despite his busy writing, publishing, and promotional schedule Mathias continues to aid his fellow indie authors by posting about their books at Twitter and Facebook etc. He shared his considerable knowledge of self-promotion in publishing The First Ten Steps. The book has become an important indie guide for navigating the often murky waters of using social media sites to get your eBook in front of avid readers.Mathias has taken cross promotion to a new level in his "Indie Kindy" giveaways where he gives away a FREE Kindle Touch and or Kindle Fire loaded with independently published books. These events create a great deal of interest for the authors involved and to independently published books as a whole.It is a pleasure working with M.R. Mathias and watching his amazing run at the top of the Amazon best seller lists.William R. PotterIndie authorFounder of the Independent Author Network

1. The Sword and the Dragon (Revised): The Wardstone Trilogy (Volume 1)

Book Description CreateSpace Independent Publishi, 2012. Paperback. Condition: New. 100% buyer satisfaction guarantee. *Some of our items are sealed to protect them during shipping and to maintain their listed condition* International orders over 2lbs may be subject to shipping price adjustments. Seller Inventory # mon0000085109