Items related to Are You There God? It's Me, Margaret.

Judy Blume Are You There God? It's Me, Margaret.

Are You There God? It's Me, Margaret. 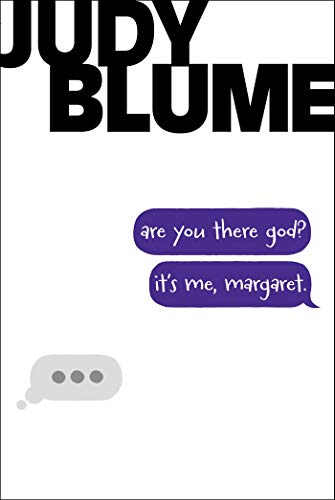 Margaret shares her secrets and her spirituality in this iconic Judy Blume novel, beloved by millions, that now has a fresh new look.

Margaret Simon, almost twelve, likes long hair, tuna fish, the smell of rain, and things that are pink. She’s just moved from New York City to Farbook, New Jersey, and is anxious to fit in with her new friends—Nancy, Gretchen, and Janie. When they form a secret club to talk about private subjects like boys, bras, and getting their first periods, Margaret is happy to belong.

But none of them can believe Margaret doesn’t have religion, and that she isn’t going to the Y or the Jewish Community Center. What they don’t know is Margaret has her own very special relationship with God. She can talk to God about everything—family, friends, even Moose Freed, her secret crush.

Margaret is funny and real, and her thoughts and feelings are oh-so-relatable—you’ll feel like she’s talking right to you, sharing her secrets with a friend.

If anyone tried to determine the most common rite of passage for preteen girls in North America, a girl's first reading of Are You There God? It's Me, Margaret would rank near the top of the list. Judy Blume and her character Margaret Simon were the first to say out loud (and in a book even) that it is normal for girls to wonder when they are ever going to fill out their training bras. Puberty is a curious and annoying time. Girls' bodies begin to do freakish things--or, as in Margaret's case, they don't do freakish things nearly as fast as girls wish they would. Adolescents are often so relieved to discover that someone understands their body-angst that they miss one of the book's deeper explorations: a young person's relationship with God. Margaret has a very private relationship with God, and it's only after she moves to New Jersey and hangs out with a new friend that she discovers that it might be weird to talk to God without a priest or a rabbi to mediate. Margaret just wants to fit in! Who is God, and where is He when she needs Him? She begins to look into the cups of her training bra for answers ...

For Margaret, everything is different this year. She's just moved from New York City to the suburbs and is anxious to fit in with her new friends--Nancy, Gretchen, and Janie. When they form a secret club to talk about private subjects like boys, bras, and getting their first periods, Margaret is happy to belong. But in Farbrook, everybody joins the Y or the Jewish Community Center. Margaret doesn't have a religion, so what's she supposed to do? Suddenly life is very confusing. Maybe it's all part of growing up, but Margaret could really use some answers.

Book Description Paperback. Condition: New. Paperback. Shipping may be from multiple locations in the US or from the UK, depending on stock availability. 192 pages. 0.240. Seller Inventory # 9781481409933

8. ARE YOU THERE GOD ITS ME MARGARET

9. ARE YOU THERE GOD ITS ME MARGARET

10. Are You There God? Itandapos;s Me, Margaret.