Items related to Bound to the Billionaire Producer: The Complete Collection... 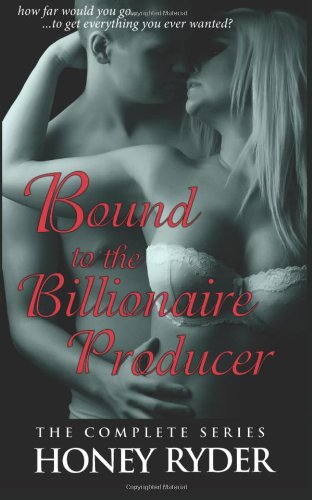 When struggling theatre actress Lucy Miller pretends to be her best friend so she can attend an audition with the legendary Benz Pictures, she encounters the gorgeous but intimidating executive Cameron Scott. The modest and insecure Lucy is shocked to find she wants this dark and enigmatic man, despite the fact that he thinks she's a different person. However, when Cameron chooses her as the one to meet his boss, the mysterious and elusive English billionaire Aiden Benz, Lucy is startled to discover Cameron himself is also inexplicably drawn to her. Forced to continue her lie or lose this man, Lucy discovers she's not the only one hiding things. Despite the vast wealth and power his position provides, Cameron is a man tormented by demons and an obsession with control. He wants Lucy to enter his employ at his Castle in the Cotswolds, and agree to be under his control completely and without question. However, only when he punishes her for breaking his rules by bending her over his desk, does Lucy realise she might be in for more than she bargained. How far is she willing to go for the man she desires? Experience a steamy romance that will leave both your heart and your body aching for more. This 24,000 word erotic romance is intended for mature audiences, and contains graphic sex, mature language and subjects suitable only for adults.

Book Description CreateSpace Independent Publishing Platform. Paperback. Condition: Good. A copy that has been read, but remains in clean condition. All pages are intact, and the cover is intact. The spine may show signs of wear. Pages can include limited notes and highlighting, and the copy can include previous owner inscriptions. At ThriftBooks, our motto is: Read More, Spend Less. Seller Inventory # G1483929493I3N00

Book Description CreateSpace Independent Publishing Platform. Paperback. Condition: Very Good. A copy that has been read, but remains in excellent condition. Pages are intact and are not marred by notes or highlighting, but may contain a neat previous owner name. The spine remains undamaged. At ThriftBooks, our motto is: Read More, Spend Less. Seller Inventory # G1483929493I4N00