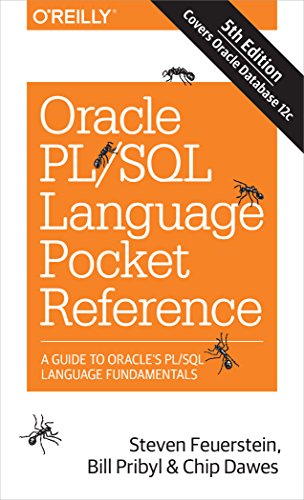 Be more productive with the Oracle PL/SQL language. The fifth edition of this popular pocket reference puts the syntax of specific PL/SQL language elements right at your fingertips, including features added in Oracle Database 12c.

Whether you’re a developer or database administrator, when you need answers quickly, the Oracle PL/SQL Language Pocket Reference will save you hours of frustration with concise summaries of:

Steven Feuerstein is considered to be one of the world's leading experts on the Oracle PL/SQL language, having written ten books on PL/SQL, including Oracle PL/SQL Programming and Oracle PL/SQL Best Practices (all published by O'Reilly Media). He has also published his first book for kids: http://stevenfeuerstein.com/vivianvulture. Steven currently serves as PL/SQL Evangelist for Oracle Corporation. He has been developing software since 1980, spent five years with Oracle (1987-1992), and was PL/SQL Evangelist for Quest Software (and then Dell) from January 2001 to February 2014. He was an Oracle ACE Director (had to give up the prestigious title when he rejoined Oracle) and writes regularly for Oracle Magazine, which named him the PL/SQL Developer of the Year in both 2002 and 2006. He is also the first recipient of ODTUG's Lifetime Achievement Award (2009). Steven's latest initiative is the PL/SQL Challenge ( http://www.plsqlchallenge.com ), a daily quiz for PL/SQL developers; hundreds of programmers play each day. Check it out and join the fun! You can also catch up on his latest, mostly non-PLSQL rants at http://feuerthoughts.blogspot.com.

Bill Pribyl is the primary author of Learning Oracle PL/SQL and the coauthor of Oracle PL/SQL Programming and its companion pocket reference, all from O'Reilly Media. He is oddly proud of having used PL/SQL to write TCP/IP networking clients, tnsping callouts, near-realtime commodity price loaders, and transcendental functions. Bill, who holds a degree in physics from Rice University, is the former editor of the IOUG technical journal (Select) and former president of the South Central Oracle Users Group. At home in Houston, Texas, Bill leads a quiet life with sweet memories of his late wife. And a big dog.

Chip Dawes has worked with Oracle database systems from version 5 through 12 and is a consultant with PwC's Health Industry Advisory services.