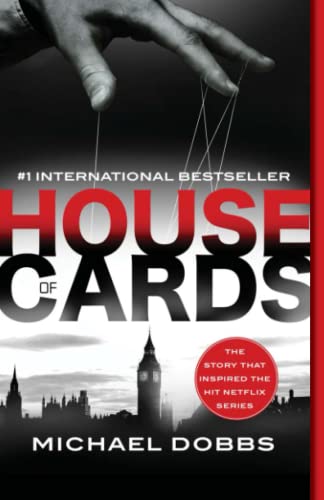 The USA Today Bestseller from the Executive Producer of the hit Netflix series House of Cards.

A dark tale of greed, corruption, and unquenchable ambition, House of Cards reveals that no matter the country, politics, intrigue and passion reign in the corridors of power.

Francis Urquhart has his hand on every secret in politics-and is willing to betray them all to become prime minister.

Mattie Storin is a tenacious young reporter who has a knack for finding the real stories hidden behind the spin. When she stumbles upon a scandalous web of intrigue and financial corruption at the very highest levels, she vows to reveal the truth. But to do so she must battle her own demons and risk everything, even her life.

An explosive political thriller reinvented for a new generation. Fans of Vince Flynn, David Baldacci and Robert Ludlum will revel in getting to know Francis Urquhart, the man we love to hate.

As a former advisor to Margaret Thatcher, Conservative Party Chief of Staff, and now peer of the realm and Conservative member of the House of Lords, Baron Dobbs provides an insider look at the twists and turns of British politics.

Other books in the House of Cards series:
House of Cards, Book 1 – The dark, twisting schemes of a politician determined to succeed
To Play The King, Book 2 – Newly elected Prime Minister plots to take on the Monarchy to grab even more power
The Final Cut, Book 3 – The perfect finale to this twisted trilogy, Urquhart refuses to close his career quietly

What readers are saying about House of Cards:

"the best of modern political fiction. The reader can't help but be riveted by the lead character, even hoping for his sinister plots to succeed."

"fast-paced and interesting. I couldn't put the book down"

"wonderful and extremely...one of the most memorable and unashamedly wicked characters in political fiction."

What reviewers are saying about House of Cards:

"This blood and thunder tale, lifelike and thoroughly cynical, certainly carries the ring of authenticity....a great triumph." - The Independent

'The exciting thriller that has Westminster buzzing. Here is a political thriller writer with a marvellous inside track knowledge of government.' - Daily Express

'It has pace, a beguiling authenticity and a cast of Achilles heels.' - Daily Telegraph

What everyone is saying about the House of Cards books:

"This blood and thunder tale, lifelike and thoroughly cynical, certainly carries the ring of authenticity....a great triumph." - The Independent

"...a political thriller writer with a marvellous inside track knowledge of government." - Daily Express

"If you are a fan of the modern TV series than you should definitely pick up these books."

"Michael Dobbs has an uncanny knack of forecasting the future. A fascinating read and a conclusion that would send a chill through Buckingham Palace." - Sunday Express

'The exciting thriller that has Westminster buzzing. Here is a political thriller writer with a marvellous inside track knowledge of government.' - Daily Express

'It has pace, a beguiling authenticity and a cast of Achilles heels.' - Daily Telegraph

'What a brilliant creation F.U. is.' - Sunday Telegraph

Michael Dobbs is also Lord Dobbs of Wylye, a member of the British House of Lords. He is Britain's leading political novelist and has been a senior adviser to Prime Ministers Margaret Thatcher, John Major and David Cameron. His bestselling books include House of Cards, which was made into an award winning TV series in the UK and is currently being remade into a major US television series by Kevin Spacey and the director David Fincher. Read more on his website - www.michaeldobbs.com.