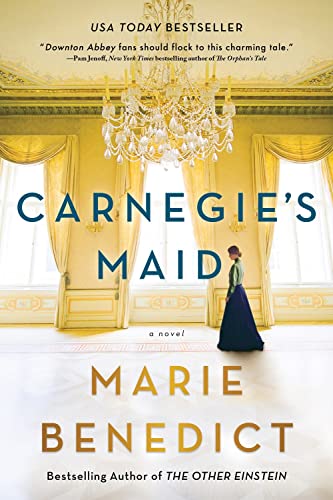 From the author of The Only Woman in the Room comes the mesmerizing tale of what kind of woman could have inspired an American dynasty.

Clara Kelley is not who they think she is. She's not the experienced Irish maid who was hired to work in one of Pittsburgh's grandest households. She's a poor farmer's daughter with nowhere to go and nothing in her pockets. But the other woman with the same name has vanished, and pretending to be her just might get Clara some money to send back home.

If she can keep up the ruse, that is. Serving as a lady's maid in the household of Andrew Carnegie requires skills she doesn't have, answering to an icy mistress who rules her sons and her domain with an iron fist. What Clara does have is a resolve as strong as the steel Pittsburgh is becoming famous for, coupled with an uncanny understanding of business, and Andrew begins to rely on her. But Clara can't let her guard down, not even when Andrew becomes something more than an employer. Revealing her past might ruin her future ― and her family's.

With captivating insight and heart, Carnegie's Maid tells the story of one brilliant woman who may have spurred Andrew Carnegie's transformation from ruthless industrialist into the world's first true philanthropist.

Marie Benedict is a lawyer with more than ten years' experience as a litigator at two of the country's premier law firms and for Fortune 500 companies.

"Feels like Downton Abbey in the United States...Benedict demonstrates the relevance of history to the present day in this impeccably researched novel of the early immigrant experience. Deeply human, and brimming with complex, vulnerable characters, CARNEGIE'S MAID shows the power of ambition tempered by altruism, and the true realization of the American Dream." - Erika Robuck, national bestselling author of Hemingway's Girl

"In CARNEGIE'S MAID, Marie Benedict skillfully introduces us to Clara, a young woman who immigrates to American in the 1860s and unexpectedly becomes the maid to Andrew Carnegie's mother. Clara becomes close to Andrew Carnegie and helps to make him America's first philanthropist. Downton Abbey fans should flock to this charming tale of fateful turns and unexpected romance, and the often unsung role of women in history." - Pam Jenoff, New York Times bestselling author of The Orphan's Tale

"With its well-drawn characters, good pacing, and excellent sense of time and place, this volume should charm lovers of historicals, romance, and the Civil War period. Neither saccharine nor overly dramatized, it's a very satisfying read. " - Library Journal

"Marie Benedict has penned a sensational novel that turns the conventional Cinderella story into an all-American triumph. Young Clara Kelley steps off the boat from Ireland into Andrew Carnegie's affluent world, where invention can transform men and women into whatever they dare to dream." - Sarah McCoy, New York Times and international bestselling author of The Mapmaker's Children and The Baker's Daughter

"...engaging. The chaste romance will draw readers of inspirational fiction, while the novel is constructed to appeal to those seeking a tale with an upstairs-downstairs dynamic and all-but-invisible female characters who are either the impetus for or the actual originators of great men's great ideas. For Fans of Liz Trenow, Erika Robuck, and Nancy Horan. " - Booklist

"In spare prose, Wilson ratchets up the horror spawned by obsession to a bloody end. For those who tolerate intense, sometimes graphic fiction, this is mesmerizing." - Booklist

"A special addition to the Downton Abbey canon...an absorbing exploration of the influence one plucky young woman might have had on this pioneering philanthropist. " - Toronto Star