Items related to Writings of the Apostolic Fathers: Mathetes, Polycarp,...

Writings of the Apostolic Fathers: Mathetes, Polycarp, Barnabas, and Papias 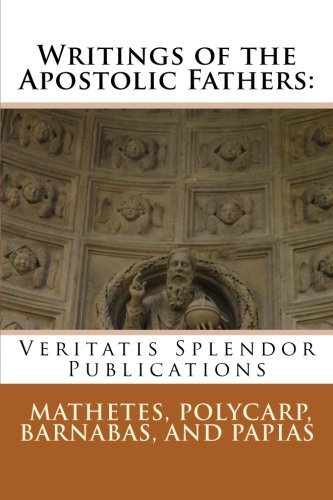 The Apostolic Fathers are Christian writers of the first and second centuries who are known, or are considered, to have had personal relations with some of the Apostles, or to have been so influenced by them that their writings may be held as echoes of genuine Apostolic teaching. Though restricted by some to those who were actually disciples of the Apostles, the term applies by extension to certain writers who were previously believed to have been such, and virtually embraces all the remains of primitive Christian literature antedating the great apologies of the second century, and forming the link of tradition that binds these latter writings to those of the New Testament. The writings of the Apostolic Fathers are generally epistolary in form, after the fashion of the canonical Epistles, and were written, for the greater part, not for the purpose of instructing Christians at large, but for the guidance of individuals or local churches in some passing need. Happily, the writers so amplified their theme that they combine to give a precious picture of the Christian community in the age which follows the death of St. John. Written under such circumstances, the works of the Apostolic Fathers are not characterized by systematic expositions of doctrine or brilliancy of style. Meagre as they necessarily are in their testimony, the Apostolic Fathers bear witness to the faith of Christians in the chief mysteries of the Divine Unity and Trinity. The Trinitarian formula occurs frequently. If the Divinity of the Holy Ghost is but once obscurely alluded to in Hermas, it must be remembered that the Church was as yet undisturbed by anti-Trinitarian heresies. The dominant error of the period was Docetism, and its refutation furnishes these writers with an occasion to deal at greater length with the Person of Jesus Christ. He is the Redeemer of whom men stood in need. This edition contains the writings of Mathetes, Polycarp, Barnabas, and Papias.

1. Writings of the Apostolic Fathers: Mathetes, Polycarp, Barnabas, and Papias

Book Description CreateSpace Independent Publishi, 2014. Paperback. Condition: Good. Minor shelf wear Good condition is defined as: a copy that has been read but remains in clean condition. All of the pages are intact and the cover is intact and the spine may show signs of wear. The book may have minor markings which are not specifically mentioned. Most items will be dispatched the same or the next working day. Seller Inventory # wbb0013850031