Items related to The Fun of Staying in Touch: How Our Loved Ones Contact...

Grimes Esq., Roberta The Fun of Staying in Touch: How Our Loved Ones Contact Us and How We Can Contact Them

The Fun of Staying in Touch: How Our Loved Ones Contact Us and How We Can Contact Them 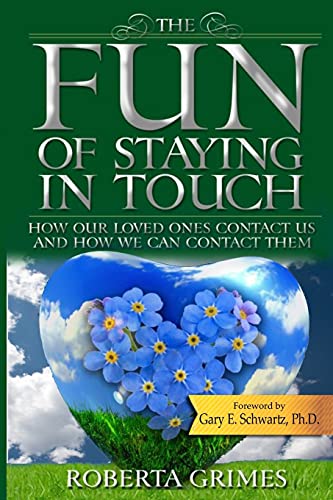 Communicating with the dead is easier now than it ever was, and in fact your beloved may be trying to communicate with you right now! In the 21st century, you have many ways to connecting with the dead, including some that are new and evolving. The Fun of Staying in Touch is an exciting account of the wonderful and sometimes amazing ways in which the dead now let us know that they are happy and waiting for us in a glorious reality where love never ends.

This book is meant to be an overview for those with little knowledge in this field. Rather than footnotes, it includes a brief study guide and also a comprehensive list of resources that you might use to duplicate my research. And if you are curious about the place from which the dead are communicating with us, you might read The Fun of Dying - Find Out What Really Happens Next for a similar overview of the death process and the glorious realities that we enter at death.

"The statistical probability that organic structures and the most precisely harmonized reactions that typify living organisms would be generated by accident, is zero."  -Ilya Prigogine, Physicist and Chemist, winner of the 1977 Nobel Prize in Chemistry

"In considering the value of evidence for supernormal phenomena the importance of the cumulative character of the evidence must be taken into account. It is the undersigned coincidence of witnesses who have had no communication with each other that constitutes its value taken as a whole, while a single case may be doubtful or disproved, just as a single stick may be broken, but a faggot may defy all our attempts at breaking a bundle of sticks."  -Sir William Barrett in Deathbed Visions(1926)

This is an exciting time to be alive! After thousands of years during which humankind has been struggling to try to make sense of things, the truth about what we are, what reality is, and what actually is going on apparently is now being revealed. And it is going to change everything!

We now know that you are an eternal being. You never began, you never will end. The material reality in which you think you live is just a small part of a greater reality that is even now coming into view. And it is all good! We now know that you and everyone you love are together forever and safe in everlasting arms. But for many people, even that is not the best news. No, the very best news of all is the fact that we are entering an age in which communication between the living and the dead will become even easier.

The dead have always been much more aware of us than we are of them. They have been trying to for millennia to get our attention, if only to assure us that those we love have survived their deaths. There are reasons why the dead have so much difficulty making their presence known, some of which have to do with the nature of reality itself and some of which have to do with human nature. When the leaders of mainstream science and mainstream Christianity have spent the past two thousand years battling over which of them possesses the truth, they both have naturally been unwilling to consider the possibility that neither of them has it right and they have both missed the big picture. Of course, advocates for mainstream Christianity and mainstream science have substantial interests to protect, so as information becomes even more widely available, their impulse will be to fight its dissemination.

We are blessed to live in an age in which old beliefs are reaching what seems to be their natural dead ends. And as the old theistic and atheistic belief systems lose their strangleholds on our flow of information, more and more people are venturing into the vast and fertile valley of afterlife evidence that has accumulated between mainstream Christianity and mainstream science over the past two centuries. Working independently, these pioneering researchers are assembling an understanding of reality that is consistent with both quantum physics and the teachings of Jesus. How amazing is that? As you will see, the truth about reality is beyond-belief wonderful! And it is about to become common knowledge. We do indeed live in exciting times.

It may surprise you to learn that we have been receiving abundant, consistent, and independently verified communications from the dead for nearly two hundred years. Even one such proven communication from someone who is documented to be dead should have settled the question of whether or not our minds survive our deaths, and by now we have many hundreds. It is no longer possible for an open-minded person who examines the best evidence to have any doubt that the dead survive.

Sadly, though, for more than a century, both mainstream scientists and mainstream Christians have done all they could to disparage these proven communications from the dead and to demonize those who investigate them. It is little wonder that what is the greatest news in human history has been hidden under a bushel for so long. I came across this information only because I had had two extraordinary experiences of light in childhood, so I knew there was something behind the curtain. I wanted to figure out what it was.  It took me decades of studying communications from the dead and relevant aspects of mainstream science before I was convinced that I had figured things out.

As you begin to learn the truth for yourself, you will find that the war against it continues. The greater reality that we enter at death is so amazingly different from this limited material universe that scientists trying to protect their careers have long used three dishonest techniques in an effort to keep you from wondering about it:

1.       They ignore the afterlife evidence. This worked for the entire twentieth century. If scientists and the news media won't talk about something, then obviously it must not exist. The rise of the Internet has scotched the method, but scientific stonewalling explains why what has been known among researchers for more than a century is only now coming to your attention.

2.       They try to debunk the afterlife evidence. With more people now taking the afterlife evidence seriously, some self-appointed defenders of the scientific faith have adopted a more aggressive technique. These folks generally call themselves skeptics, but their whole focus is on finding some way to explain a single aspect of some unusual phenomenon, to prove fraud,or otherwise discredit whatever elements of afterlife research might be catching the public's eye. All of us should be skeptical! But anyone who calls himself a skeptic and then proceeds to demonstrate a minimal understanding of some phenomenon while he tries to explain it away is a debunker. Ignore him.

3.They assert without support that some afterlife-related phenomenon has been debunked, or some researcher is a fraud. It is easy now to debunk the debunkers. Thanks to the Internet, so much good information has become so widely available that the efforts of debunkers look amateurish. In desperation, those who would deny you these truths have taken to declaring without analysis or support that phenomena and researchers have been debunked or have been proven fraudulent. So widespread has this practice become among online encyclopedias and science-defender websites that any resource that declares that anything has been debunked should be presumed to be lying to you until your own research has proven otherwise.

The fact that mainstream scientists and their partisans still refuse to investigate the afterlife evidence as they might investigate any other interesting phenomenon surprises me, frankly. The search for the truth is not a game to be won, but rather it is a shared effort by all of us to better understand what is going on. The longer they lie about the afterlife evidence, the more our most trusted sources of information are going to damage their own credibility,and knowing that saddens me. Their continued stonewalling means that humankind's dawning understanding of the fact that our minds are eternal is going to be a bottom-up effort. Those who should have been the leading discoverers of these truths will in the end be the last to acknowledge them.

Dead communicators tell us that it was never intended that physical death should come between loved ones. And thanks to the efforts of dedicated researchers now living on both sides of the veil,our illusory separation seems to be ending.

"Neither was it intended that the two worlds, ours and yours, should be as they are now -- so far apart in thought and contact. The day will assuredly come when our two worlds will be closely interrelated, when communication between the two will be a commonplace of life, and then the great wealth of resources of the spirit world will be open to the earth world, to draw upon for the benefit of the whole human race." - Monsignor Robert Hugh Benson, speaking from the afterlife through Anthony Borgia in Life in the World Unseen

Have you lost someone you love to the temporary separation that is physical death? Do you wish there were a way to communicate and know for certain that your loved one is fine? You will be delighted to know that communicating with the dead is easier now than it ever was before, and in fact your beloved may be trying to communicate with you right now!

The dead have always been much more aware of us than we are of them. For millennia they have been forced to witness the grief of those left behind on earth, unable to offer much in the way of comfort. Over thousands of years of post-death frustration they have learned to use their minds to manipulate our reality in surprising ways in order to prove that they have survived. Once you know what the dead are most likely to do, you will be able to spot and enjoy their post-death signs.

You should be aware, too, that in this new century you have a variety of ways to initiate contact with the dead, including some that are new and evolving. Thanks to the patient work of dedicated researchers, the day when the living and the dead can joyfully join hands across dimensional boundaries seems at last to be near at hand.

The Fun of Staying in Touch is an exciting account of the wonderful and sometimes amazing ways in which the dead now let us know that they are happy and waiting for us in a glorious reality where love never ends.