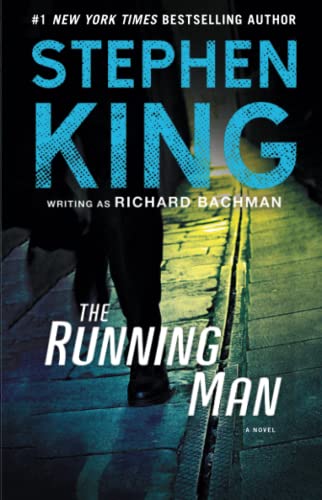 A desperate man attempts to win a reality TV game where the only objective is to stay alive in this #1 national bestseller from Stephen King, writing as Richard Bachman.

“Tomorrow at noon, the hunt begins. Remember his face!”

Ben Richards is a desperate man. With no job, no money, no way out, and a young daughter in need of proper medical attention, he must turn to the only possibility of striking it rich in this near-future dystopian America: participating in the ultraviolent TV programming of the government-sanctioned Games Network. Ben soon finds himself selected as a contestant on the biggest and the best that the Games Network has to offer: The Running Man, a no-holds-barred thirty-day struggle to stay alive as public enemy number one, relentlessly hunted by an elite strike force bent on killing him as quickly as possible in front of an audience all too eager to see that happen. It means a billion dollars in prize money if he can live for the next month. No one has ever survived longer than eight days. But desperation can push a person do things they never thought possible—and Ben Richards is willing to go the distance in this ultimate game of life and death....

“Under any name King mesmerizes the reader.” —Chicago Sun-Times
“No one does psychological terror better!” —Kirkus Reviews
“One of America’s top storytellers.” —Toronto Star

Stephen King is the author of more than sixty books, all of them worldwide bestsellers. His recent work includes The Institute, Elevation, The Outsider, Sleeping Beauties (cowritten with his son Owen King) and the Bill Hodges trilogy, End of Watch, Finders Keepers, and Mr. Mercedes (an Edgar Award winner for Best Novel and an AT&T Audience Network original television series). His novel 11/22/63 was named a top ten book of 2011 by The New York Times Book Review and won the Los Angeles Times Book Prize for Mystery/Thriller. His epic works The Dark Tower and It are the basis for major motion pictures, with It now the highest grossing horror film of all time. He is the recipient of the 2018 PEN America Literary Service Award, the 2014 National Medal of Arts, and the 2003 National Book Foundation Medal for Distinguished Contribution to American Letters. He lives in Bangor, Maine, with his wife, novelist Tabitha King.

The Running Man (Paperback or Softback)