Items related to Then She Was Gone: A Novel

Jewell, Lisa Then She Was Gone: A Novel 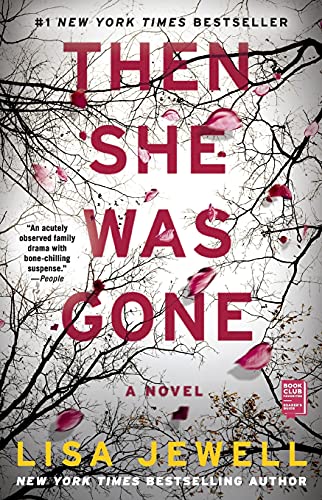 “Jewell teases out her twisty plot at just the right pace, leaving readers on the edge of their seats. Her multilayered characters are sheer perfection, and even the most astute thriller reader won’t see where everything is going until the final threads are unknotted.” —Booklist, starred review

“Sharply written with twists and turns, Jewell’s latest will please fans of Gone Girl, The Girl on the Train, or Luckiest Girl Alive." —Library Journal

Ellie Mack was the perfect daughter. She was fifteen, the youngest of three. She was beloved by her parents, friends, and teachers. She and her boyfriend made a teenaged golden couple. She was days away from an idyllic post-exams summer vacation, with her whole life ahead of her.

And then she was gone.

Now, her mother Laurel Mack is trying to put her life back together. It’s been ten years since her daughter disappeared, seven years since her marriage ended, and only months since the last clue in Ellie’s case was unearthed. So when she meets an unexpectedly charming man in a café, no one is more surprised than Laurel at how quickly their flirtation develops into something deeper. Before she knows it, she’s meeting Floyd’s daughters—and his youngest, Poppy, takes Laurel’s breath away.

Because looking at Poppy is like looking at Ellie. And now, the unanswered questions she’s tried so hard to put to rest begin to haunt Laurel anew. Where did Ellie go? Did she really run away from home, as the police have long suspected, or was there a more sinister reason for her disappearance? Who is Floyd, really? And why does his daughter remind Laurel so viscerally of her own missing girl?

Lisa Jewell is the internationally bestselling author of eighteen novels, including the New York Times bestseller Then She Was Gone, as well as I Found You, The Girls in the Garden, and The House We Grew Up In. In total, her novels have sold more than two million copies across the English-speaking world and her work has also been translated into sixteen languages so far. Lisa lives in London with her husband and their two daughters. Connect with her on Twitter @LisaJewellUK and on Facebook @LisaJewellOfficial.

Then She Was Gone PROLOGUE


Those months, the months before she disappeared, were the best months. Really. Just the best. Every moment presented itself to her like a gift and said, Here I am, another perfect moment, just look at me, can you believe how lovely I am? Every morning was a flurry of mascara and butterflies, quickening pulse as she neared the school gates, blooming joy as her eyes found him. School was no longer a cage; it was the bustling, spotlit film set for her love story.

Theo Goodman had never had a girlfriend and everyone thought maybe he was gay. He was kind of pretty, for a boy, and very thin. And just, basically, really, really nice. Ellie had dreamed about being with him for years, whether he was gay or not. She would have been happy just to have been his friend. His young, pretty mum walked to school with him every day. She wore gym gear and had her hair in a ponytail and usually had a small white dog with her that Theo would pick up and kiss on the cheek before placing it gently back down on the pavement; then he would kiss his mum and saunter through the gates. He didn’t care who saw. He wasn’t embarrassed by the powder-puff dog or his mum. He was self-assured.

Then one day last year, just after the summer holiday, he had struck up a conversation with her. Just like that. During lunch, something to do with some homework assignment or other, and Ellie, who really knew nothing much about anything, knew immediately that he wasn’t gay and that he was talking to her because he liked her. It was totally obvious. And then, just like that, they were boyfriend and girlfriend. She’d thought it would be more complicated.

But one wrong move, one tiny kink in the time line, it was all over. Not just their love story, but all of it. Youth. Life. Ellie Mack. All gone. All gone forever. If she could rewind the timeline, untwist it and roll it back the other way like a ball of wool, she’d see the knots in the yarn, the warning signs. Looking at it backward it was obvious all along. But back then, when she knew nothing about anything, she had not seen it coming. She had walked straight into it with her eyes open.

Book Description Paperback. Condition: New. Reprint. Carefully packaged and shipped within 24 hours! Most CDs and books have multiple editions; if you want a specific edition please ask via email.Book is in perfect condition. Seller Inventory # BX22-0314

Then She Was Gone

Then She Was Gone: A Novel Paperback