Items related to Six Days of the Condor 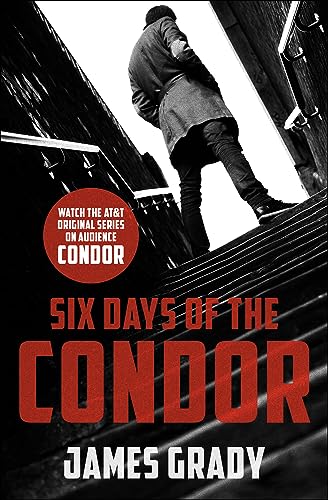 The classic spy thriller about corruption in the CIA that inspired the hit film and TV show: “A master of intrigue” (John Grisham).

Sandwiches are a part of Ronald Malcolm’s every day, but one just saved his life. On the day that gunmen pay a visit to the American Literary Historical Society, he’s out at lunch. The society is actually a backwater of the Central Intelligence Agency, where Malcolm and a few other bookworms comb mystery novels for clues that might unlock real life diplomatic questions. One of his colleagues has learned something he wasn’t meant to know. A sinister conspiracy has penetrated the CIA, and the gunmen are its representatives. They massacre the office, and only learn later of Malcolm—a loose end that needs to be dealt with.

Malcolm—codename Condor—calls his handlers at the agency, hoping for a safe haven, instead drawing another attempt on his life. With no one left to trust he goes on the run. But like it or not, Malcolm is the only person who can root out the corruption at the highest levels of the CIA.

James Grady (b. 1949) is the author of screenplays, articles, and over a dozen critically acclaimed thrillers. Born in Shelby, Montana, Grady worked a variety of odd jobs, from hay bucker to gravedigger, before graduating from the University of Montana with a degree in journalism. In 1973, after years of acquiring rejection slips for short stories and poems, Grady sold his first novel: Six Days of the Condor, a sensational bestseller that was eventually adapted into a film starring Robert Redford. After moving to Washington, DC, Grady worked for a syndicated columnist, investigating everything from espionage to drug trafficking. He quit after four years to focus on his own writing, and has spent the last three decades composing thrillers and screenplays. His body of work has won him France’s Grand Prix du Roman Noir, Italy’s Raymond Chandler Award, and Japan’s Baka-Misu literary prize. Grady’s most recent novel is Mad Dogs (2006). He and his wife live in a suburb of Washington, DC.

“Grady is a master of intrigue.” —John Grisham

“A shock at every turn!” —Publishers Weekly

Shipping: US$ 61.54
From United Kingdom to U.S.A.
Destination, rates & speeds