Items related to The Conquest of Bread

Kropotkin, Peter The Conquest of Bread

The Conquest of Bread 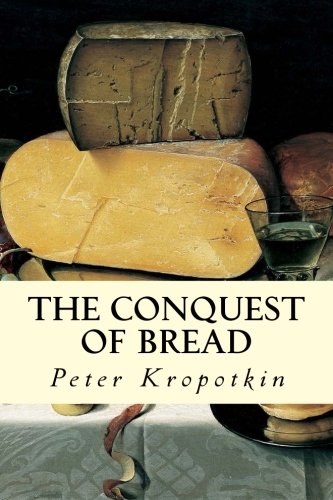 The Conquest of Bread is an 1892 book by the Russian anarcho-communist Peter Kropotkin. Originally written in French, it first appeared as a series of articles in the anarchist journal Le Révolté. It was first published in Paris with a preface by Élisée Reclus, who also suggested the title. Between 1892 and 1894 it was serialized, in part, in the London journal Freedom, of which Kropotkin was a co-founder. In the work, Kropotkin points out what he considers to be the defects of the economic systems of feudalism and capitalism, and why he believes they thrive on and maintain poverty and scarcity. He goes on to propose a more decentralized economic system based on mutual aid and voluntary cooperation, asserting that the tendencies for this kind of organization already exist, both in evolution and in human society. The Conquest of Bread has become a classic of political anarchist literature. It was heavily influential on both the Spanish Civil War and the Occupy movement, and continues to be influential on the Kurdish Rojava revolution in the Syrian Civil War. In 1886, Kropotkin, with the help of some prominent left-wing intellectuals, donors, and sympathizers, was released from French prison. Fearful of the anarchist scare that was gripping continental Europe following the assassination of Alexander II, and wishing to focus more time on composing theory and arguing for his revolutionary ideals, Kropotkin moved to London in the same year.Following the death of Mikhail Bakunin in 1876, anarchists desired a prominent and respected theorist to explain their ideas, and after the splitting of the First International between Marxists and anarchists, Kropotkin wished to formally explain anarcho-communism in a way that would clearly differentiate the anarchists from the Marxists, but also help to correct what he saw as flaws in Bakunin's ideology of collectivist anarchism. With this aim, Kropotkin spent a great deal of time in London writing multiple books and pamphlets, in-between his international speaking tours to the United States and Canada. It was during this time of rapid literary output that Kropotkin wrote The Conquest of Bread, which became his most well-known attempt to systematically explain the essential parts of anarcho-communism. Kropotkin originally wrote the text in French, and published in the French journal Le Révolté, where he served as the primary editor. Following its publication in France, Kropotkin published a serialized version in English, in the London anarchist journal Freedom. The book would later be collected and published as a book, in France in 1892, and in England in 1907. The publication of the text was a watershed moment in anarchist history, since it was the first time that a completed and in-depth theoretical work of anarcho-communist theory was available to the public. The publication of the text shifted the focus of anarchism from individualist, mutualist, and collectivist strains to social and communist tendencies. This shift would prove to be one of the most enduring changes in the history of anarchism, as anarchism developed throughout the 20th century with Kropotkin and The Conquest of Bread as firm reference points.

Peter Kropotkin (1842–1921) rejected his aristocratic birthright and the inequalities of Russian society to pursue a philosophy of nonviolent anarchism based on mutual aid.

1. The Conquest of Bread

2. The Conquest of Bread