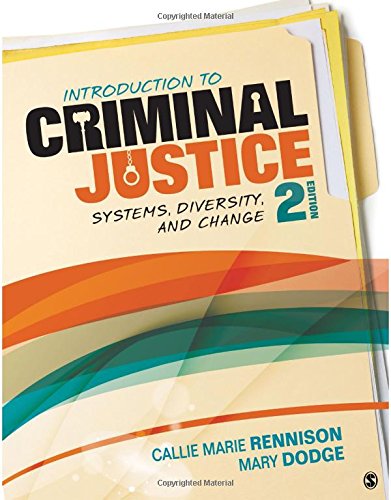 Introduction to Criminal Justice: Systems, Diversity, and Change, Second Edition, offers students a brief, yet comprehensive, introduction to Criminal Justice with up-to-date coverage of all aspects of the criminal justice system in succinct and engaging chapters. Authors Callie Marie Rennison and Mary Dodge weave four true criminal case studies throughout the book, capturing students’ attention with memorable stories that illustrate the real-life pathways and outcomes of criminal behavior and victimization. Designed to show the connectedness of the criminal justice system, each case study brings the chapter concepts to life. To further captivate and inform students, important and timely topics such as ethics, policy, gender, diversity, victimization, and white-collar crime are discussed throughout.

Callie Marie Rennison is the Director of Equity, and Title IX Coordinator at the University of Colorado Denver | Anschutz Medical Campus. In addition, she is a full professor, and former Associate Dean of Faculty Affairs in the School of Public Affairs, University of Colorado Denver. She earned a PhD in 1997 in political science from the University of Houston, University Park. Her areas of research interest include investigating the nature, extent, and consequences of violent victimization, with an emphasis on research methodology, quantitative analysis, and measurement. Much of this research focuses on violence against women, violence against minority groups such as African Americans and Hispanics, crime data, and victim interaction with the criminal justice system. Callie recently served on a National Academies committee examining domestic sex trafficking of minors in the United States. Her research has appeared in numerous journals, including the Journal of Quantitative Criminology, Justice Quarterly, Violence and Victims, and Violence Against Women. Callie has taught a variety of graduate and undergraduate courses, including statistics, research methods, murder in America, crime and the media, and introduction to criminal justice.

Mary Dodge earned her PhD in 1997 in criminology, law, and society from the School of Social Ecology at the University of California, Irvine. She received her BA and MA in psychology from the University of Colorado at Colorado Springs. She is a full professor at the University of Colorado Denver in the School of Public Affairs. Her research articles have appeared in the American Journal of Criminal Justice, Women & Criminal Justice, Contemporary Issues in Criminology, the International Journal of the Sociology of Law, The Prison Journal, Police Quarterly, the Journal of Contemporary Criminal Justice, and the Encyclopedia of White-Collar and Corporate Crime. Her most recent articles explore public opinion and white-collar crime and misconduct by policewomen. She and Gilbert Geis coedited the book Lessons of Criminology and share authorship on the book Stealing Dreams: A Fertility Clinic Scandal. She is also the author of Women and White-Collar Crime. Her research and writing interests include women in the criminal justice system, white-collar crime, policing, prostitution, and courts.

Mary was the 2007 recipient of the campuswide University of Colorado Denver Excellence in Teaching Award. She received the School of Public Affairs Teaching Award in 2001, 2005, and 2006 and the Research and Creative Activities Award in 2002 and 2004. In 2011, she received the School of Public Affairs and University of Colorado’s awards for excellence in service. Her research often involves collaboration with local and national police departments and law enforcement agencies.

"There is nothing on the market that is as comprehensive in coverage using various delivery modes of that coverage, the most updated, well organized, and presented with ample list of discussion questions/exercises as well as study tools."

"I really like all of the springboards for discussion included within the text, as interactivity is one of the great challenges in online instruction"

"I thought this textbook worked really well for the material we were learning. It was clear and concise and presented the material in a way that was easy to understand." Author: Student`

"Really appreciated the focus on diversity and the specific cases/examples weaves through the textbook." Author: Student