Items related to The Nix 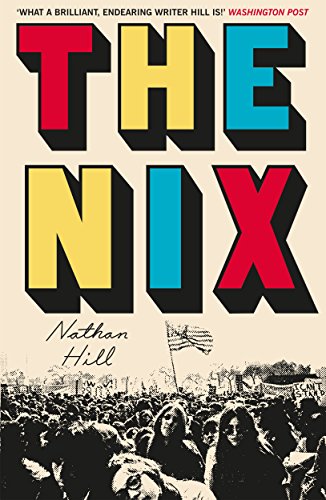 Hill, Nathan. The Nix. London, Picador, 2017 Octavo. 625 pages. Original Hardcover with original dustjacket in protective collector's mylar. Excellent condition with only very minor signs of external wear. Includes the following contents:- The Packer Attacker / Ghosts of the Old Country / Enemy, Obstacle, Puzzle, Trap / The House Spirit / A Body for Each of Us / Invasive Species / Circle / Search and Seizure Revolution / Deleveraging etc. Meet Samuel: stalled writer, bored teacher at a local college, obsessive player of online video games. He hasn't seen his mother, Faye, in decades, not since she abandoned her family when he was a boy. Now she has suddenly reappeared, having committed an absurd politically motivated crime that electrifies the nightly news, beguiles the Internet, and inflames a divided America. The media paints Faye as a radical hippie with a sordid past, but as far as Samuel knows, his mother was an ordinary girl who married her high-school sweetheart. Which version of his mother is true? Two facts are certain: she's facing some serious charges, and she needs Samuel's help. As Samuel begins to excavate his mother's - and his country's - history, the story moves from the rural Midwest of the 1960s, to New York City during Occupy Wall Street, back to Chicago in 1968 and, finally, to wartime Norway, home of the mysterious Nix. Samuel will unexpectedly find that he has to rethink everything he ever knew about his mother - a woman with an epic story of her own, a story she has kept hidden from the world. (Publisher).

An Amazon Best Book of September 2016: The Nix is a surprising novel that you didn’t know you were waiting for until you start reading. At its center is Samuel Andresen-Anderson, a failed writer and increasingly apathetic college professor, who gets a second chance at literary fame from the most unlikely source—the mother who abandoned him as a child. The American public is up in arms about a rather absurd crime that Samuel’s mother committed against an obnoxious politician. While Sam is shocked and surprised to learn the whereabouts of his estranged mother, he also realizes it’s the chance of a lifetime to tap into the zeitgeist with some choice tidbits about her, if he can write it before media A.D.D. sets in. But in order to write the book that will revive him, Samuel is forced to dig into her life, and he discovers a completely different version of the woman he thought he knew; it turns out he’s not the only one who’s life is carved out of traumatic events. Nathan Hill is incredibly perceptive, as in this, which I can’t stop thinking about: “The things we love the most are the most disfiguring. Such is our greed for them.” Hill has created a brilliant junction of mother-son saga and comic satire about our self-righteous and obsessive society. This is a big, clever novel that wraps itself around you until you never want to leave. --Seira Wilson, The Amazon Book Review

NATHAN HILL’s short fiction has appeared in many literary journals, including The Iowa Review, AGNI, The Gettysburg Review, and Fiction, which awarded him its annual Fiction Prize. A native Iowan, he lives with his wife in Naples, Florida.

Shipping: US$ 20.05
From United Kingdom to U.S.A.
Destination, rates & speeds

Shipping: US$ 31.80
From United Kingdom to U.S.A.
Destination, rates & speeds

Shipping: US$ 31.80
From United Kingdom to U.S.A.
Destination, rates & speeds