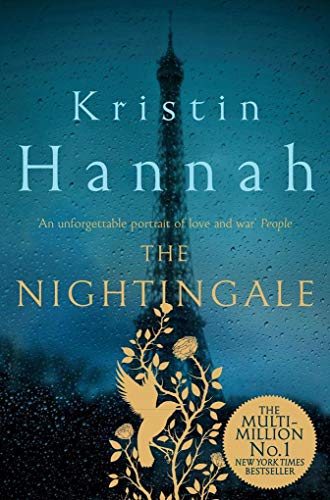 The Amazon Spotlight Pick for February 2015: Kristin Hannah is a popular thriller writer with legions of fans, but her latest novel, The Nightingale, soars to new heights (sorry) and will earn her even more ecstatic readers. Both a weeper and a thinker, the book tells the story of two French sisters – one in Paris, one in the countryside – during WWII; each is crippled by the death of their beloved mother and cavalier abandonment of their father; each plays a part in the French underground; each finds a way to love and forgive. If this sounds sudsy. . . well, it is, a little. . . but a melodrama that combines historical accuracy (Hannah has said her inspiration for Isabelle was the real life story of a woman who led downed Allied soldiers on foot over the Pyrenees) and social/political activism is a hard one to resist. Even better to keep you turning pages: the central conceit works – the book is narrated by one of the sisters in the present, though you really don’t know until the very end which sister it is. Fast-paced, detailed, and full of romance (both the sexual/interpersonal kind and the larger, trickier romance of history and war), this novel is destined to land (sorry, again) on the top of best sellers lists and night tables everywhere. -- Sara Nelson

Kristin Hannah is the New York Times bestselling author of novels including Night Road, Firefly Lane, True Colors and Winter Garden. She was born in Southern California and moved to Western Washington when she was eight. A former lawyer, Hannah started writing when she was pregnant and on bed rest for five months. Writing soon became an obsession, and she has been at it ever since. She is the mother of one son and lives with her husband in the Pacific Northwest and Hawaii.

Polly Stone has recorded a number of popular audiobooks, the most prominent of which is Sarah's Key by Tatiana de Rosnay. Publishers Weekly praised her narration of the novel saying that " Polly Stone gives an excellent performance... [The] novel is captivating, and the powerful narration gives it even greater impact." She has also narrated Shaggy Muses and is the author of 1003 Great Things About Being Jewish.

Book Description Pan MacMillan, United Kingdom, 2017. Paperback. Condition: New. Language: English. Brand new Book. Soon to be a major motion picture, The Nightingale is a multi-million copy bestseller across the world. It is a heart-breakingly beautiful novel that celebrates the resilience of the human spirit and the endurance of women.This story is about what it was like to be a woman during World War II when women's stories were all too often forgotten or overlooked . . . Vianne and Isabelle Mauriac are two sisters, separated by years and experience, by ideals and passion and circumstance, each embarking on her own dangerous path towards survival, love and freedom in war-torn France.Kristin Hannah's The Nightingale is a novel for everyone, a novel for a lifetime.'A rich, compelling novel of love, sacrifice and survival' - Kate Morton'Movingly written and plotted with the heartless skill of a Greek tragedy, you'll keep turning the pages until the last racking sob' - Daily Mail'I loved The Nightingale . . . great characters, great plots, great emotions, who could ask for more in a novel?' - Isabel Allende, bestselling author of The House of the Spirits'A gripping tale of family, love, grief and forgiveness' - Sunday Express. Seller Inventory # AA79781509848621

Book Description 2017. Paperback. Condition: New. Paperback. The New York Times number one bestselling titleBravery, courage, fear and love in a time of war. Despite their differences, sisters Viann and Isabelle have always been close. Younger, bold.Shipping may be from multiple locations in the US or from the UK, depending on stock availability. 464 pages. 0.330. Seller Inventory # 9781509848621

Shipping: US$ 18.09
From United Kingdom to U.S.A.
Destination, rates & speeds