Items related to Love Finer Than Wine: The Writings of Matthew Eisenfeld...

Love Finer Than Wine: The Writings of Matthew Eisenfeld and Sara Duker 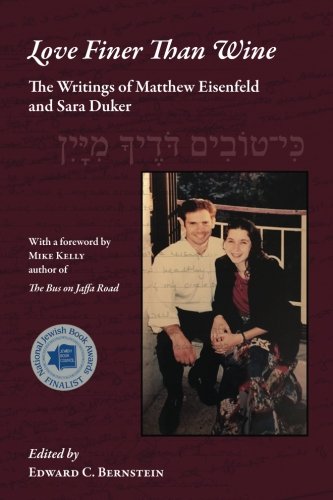 Matthew Eisenfeld and Sara Duker were the best of their generation. They were brilliant, spiritual and kind. They were leaders and idealists who dreamed of fixing a broken world. Then their dreams were shattered. On February 25, 1996, Matt and Sara were murdered on the Number 18 Bus in Jerusalem. Their deaths left a void that can never be filled. A generation has passed, yet Matt and Sara still call to us. They left behind windows into their souls. Love Finer Than Wine, edited by Edward C. Bernstein, presents writings of Matt and Sara in which they contemplate life's most fundamental questions. Matt and Sara died too young, but their spirits live through their own words. "Matt and Sara are not frozen in time. They still live." From Foreword by Mike Kelly, author of The Bus on Jaffa Road. Praise for Love Finer Than Wine It’s 20 years since the murders of Sara Duker and Matt Eisenfeld, but because of the writings they left behind they are still very much with us. Sara’s and Matt’s writings over a wide range of subjects—some faith based, some science based, and some based on love—provide an insight into who these young people were. Importantly, they also give us a glimpse into what Sara and Matt would have been had their lives not been brutally cut off. If immortality is measured by the way we are remembered in the recollections of family and friends, and the writings of Sara and Matt as found in Love Finer Than Wine, then Sara and Matt have reached immortality. —Stephen M. Flatow, father of Alisa Flatow, of blessed memory Matt’s and Sara’s writings open a window into how such a devastating loss as their untimely deaths could be channeled into the inspiration that their friends continue to draw from their lives 20 years later. They are both vividly remembered for their spectacular talents, their caring and humor, and most of all, their young, romantic love that animated the world around them. These writings bring inspiration to a new generation of readers. —Rabbi Julie Schonfeld, Executive Vice President, The Rabbinical Assembly I read this lovely very well edited book in one evening. The Talmud instructs us that one must part from a friend only with words of Torah so that we won't forget him/ her. Read this book, hear their Torah. You will not forget Sara and Matt! —Rabbi Daniel Landes, Director of the Pardes Institute of Jewish Studies Even two decades after their death, Matt’s and Sara’s legacy still shapes those privileged enough to have known them. They were the best of our generation. This book will help people understand why. —Peter Beinart, Author of The Crisis of Zionism The presentation of Matt's and Sara’s writings in this book is a profound act of love.  We miss their voices so much, but in their writings we can hear their laughter again and feel their love for Judaism. Our Sages tell us that the words of the righteous are their memorial.   With the help of their writings so beautifully edited by Rabbi Bernstein, Matt and Sara will be with us always. --Rabbi David Hoffman, PhD, Vice Chancellor and Chief Advancement Officer, The Jewish Theological Seminary   I did not have the privilege of knowing Matthew Eisenfeld or Sara Duker. However, after reading the essays in this book I feel I know them and understand the tremendous loss that the Jewish people and all humanity suffered after they were so brutally killed in the terrorist action in Jerusalem. Their words are their legacy, their teachings are their path to eternity, and their memories are treasured not only by those who knew them and loved them, but now also by those who can read their words. This book allows us to appreciate their lives and their legacy. May their memories be for a blessing. —Rabbi Vernon Kurtz, Rabbi, North Suburban Synagogue Beth El, Highland Park, Illinois; President, The American Zionist Movement

Edward C. Bernstein received rabbinic ordination from the Jewish Theological Seminary in 1999. He serves as spiritual leader of Temple Torat Emet in Boynton Beach, Florida. Rabbi Bernstein serves on the Social Justice Commission of the Rabbinical Assembly and chairs its Food Justice Working Group. He blogs at rabbiedbernstein.com and at http://www.huffingtonpost.com/rabbi-edward-bernstein/.

1. Love Finer Than Wine : The Writings of Matthew Eisenfeld and Sara Duker

Book Description CreateSpace Independent Publishing Platform. Paperback. Condition: Good. A copy that has been read, but remains in clean condition. All pages are intact, and the cover is intact. The spine may show signs of wear. Pages can include limited notes and highlighting, and the copy can include previous owner inscriptions. An ex-library book and may have standard library stamps and/or stickers. At ThriftBooks, our motto is: Read More, Spend Less. Seller Inventory # G1518738176I3N10

2. Love Finer Than Wine : The Writings of Matthew Eisenfeld and Sara Duker

Book Description CreateSpace Independent Publishing Platform. Paperback. Condition: Good. A copy that has been read, but remains in clean condition. All pages are intact, and the cover is intact. The spine may show signs of wear. Pages can include limited notes and highlighting, and the copy can include previous owner inscriptions. At ThriftBooks, our motto is: Read More, Spend Less. Seller Inventory # G1518738176I3N00

3. Love Finer Than Wine: The Writings of Matthew Eisenfeld and Sara Duker

Book Description CreateSpace Independent Publishing Platform, 2015. Condition: Good. Shows some signs of wear, and may have some markings on the inside. Seller Inventory # GRP105815421