Items related to The Keystone: A Novel of the Battle of Gettysburg,...

Schrock, Douglas A The Keystone: A Novel of the Battle of Gettysburg, 1863

The Keystone: A Novel of the Battle of Gettysburg, 1863 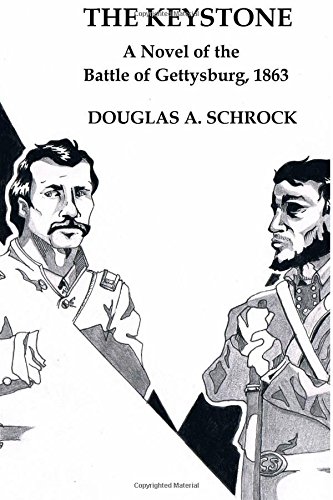 In the summer of 1863, more than 150,000 Americans met in battle on the fields and hills of southern Pennsylvania, the Keystone State. These men fought in and around a borough called Gettysburg. Here is a fictional account of how Pennsylvanians—soldiers, civilians, young women, pastors—experienced this battle and the events leading up to and following it. From the promotion of Pennsylvanian General Meade to command on June 28 until Lincoln’s unforgettable address on November 19, 1863, see the most seminal events in American history in a fresh but respectful way. Honor those who lived and fought at Gettysburg, where the keystone of American liberty was put in place. See the Civil War through the eyes of everyday Pennsylvanians who served both north and south, who answered not to themselves but to God, family, and country. Take a new but reverent look at the war, the battle, the small town that changed America forever.

Douglas A. Schrock was born in Virginia, but has lived in Michigan for most of his life now. His ancestors on both sides hail from Michigan. He enjoys reading and writing about numerous historical events, particularly the American Civil War and the World Wars. His favorite authors include Charles Dickens, J.R.R. Tolkien, and William L. Shirer.