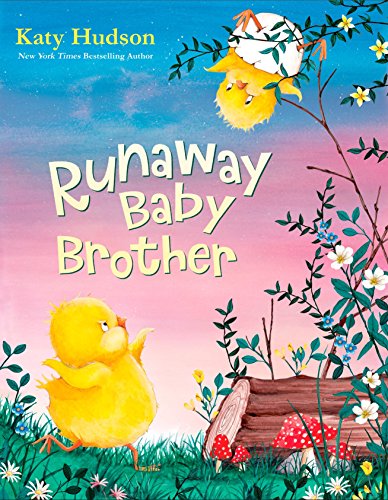 Chick and his baby brother are back in this sequel to Katy Hudson's rollicking barnyard adventure, Runaway Egg!

Now that Chick's baby brother is officially hatched (and no longer just a two-legged egg sprinting around the farm), Chick is discovering that the hassle of babysitting was just the tip of the iceberg -- the little guy just won't leave Chick alone! Try as he might, Chick just can't shake his brother, who adoringly waddles wherever he goes. But perhaps having his brother close by will prove to be a good thing in the end...

Katy Hudson's sequel to Runaway Egg is as heartwarming and hilarious as the original, and will surely find a place in the hearts of big and little siblings.

KATY HUDSON was raised in Middlesbrough, England and started her illustration career as a small child drawing on freshly painted walls around the house! Her parents quickly encouraged drawing with pencil and paper instead. Katy took to the medium (the pencil was updated to an ink pot and pen in some cases) and after some lovely time at Art College and a degree in Illustration, Katy is now a freelance illustrator working at a desk in an old London Library.

Toddler-PreS—Chick is annoyed with his new baby brother in this sequel to The Runaway Egg. Everyone told chick that he would like having a new baby brother, but so far he doesn't agree. The little chick follows him everywhere, is not good at playing games, and cries all the time. One day, the big Chick accidentally stays out too late and has to walk home in the dark. Luckily, baby brother is there to walk home with him. The sweet and simple illustrations do not provide any additional details to the text. This topic has been approached by many others and this title adds nothing new. VERDICT A cute addition but libraries can easily pass on this one if their sibling-themed shelves are getting crowded.—Brooke Newberry, La Crosse Public Library, WI

Shipping: US$ 43.73
From United Kingdom to U.S.A.
Destination, rates & speeds