Items related to An Absolutely Remarkable Thing: A Novel (The Carls)

Green, Hank An Absolutely Remarkable Thing: A Novel (The Carls) 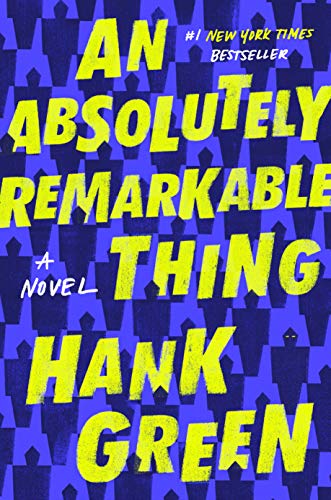 “Sparkling with mystery, humor and the uncanny, this is a fun read. But beneath its effervescent tone, more complex themes are at play.” —San Francisco Chronicle

In his wildly entertaining debut novel, Hank Green—cocreator of Crash Course, Vlogbrothers, and SciShow—spins a sweeping, cinematic tale about a young woman who becomes an overnight celebrity before realizing she's part of something bigger, and stranger, than anyone could have possibly imagined.

Roaming through New York City at three a.m., twenty-three-year-old April May stumbles across a giant sculpture. Delighted by its appearance and craftsmanship—like a ten-foot-tall Transformer wearing a suit of samurai armor—April and her best friend, Andy, make a video with it, which Andy uploads to YouTube. The next day, April wakes up to a viral video and a new life. News quickly spreads that there are Carls in dozens of cities around the world—from Beijing to Buenos Aires—and April, as their first documentarian, finds herself at the center of an intense international media spotlight.

Seizing the opportunity to make her mark on the world, April now has to deal with the consequences her new particular brand of fame has on her relationships, her safety, and her own identity. And all eyes are on April to figure out not just what the Carls are, but what they want from us.

Compulsively entertaining and powerfully relevant, An Absolutely Remarkable Thing grapples with big themes, including how the social internet is changing fame, rhetoric, and radicalization; how our culture deals with fear and uncertainty; and how vilification and adoration spring for the same dehumanization that follows a life in the public eye. The beginning of an exciting fiction career, An Absolutely Remarkable Thing is a bold and insightful novel of now.

Hank Green is the #1 New York Times bestselling author of An Absolutely Remarkable Thing. He's also the CEO of Complexly, a production company that creates educational content, including Crash Course and SciShow, prompting The Washington Post to name him "one of America's most popular science teachers." Complexly's videos have been viewed more than two billion times on YouTube. Green cofounded a number of other small businesses, including DFTBA.com, which helps online creators make money by selling cool stuff to their communities; and VidCon, the world's largest conference for the online video community. In 2017, VidCon drew more than forty thousand attendees across three events in Anaheim, Amsterdam, and Australia. Hank and his brother, John, also started the Project for Awesome, which last year raised more than two million dollars for charities, including Save the Children and Partners in Health. Hank lives in Montana with his wife, son, and cat.

Look, I am aware that you’re here for an epic tale of intrigue and mystery and adventure and near death and actual death, but in order to get to that (unless you want to skip to chapter 13—I’m not your boss), you’re going to have to deal with the fact that I, April May, in addition to being one of the most important things that has ever happened to the human race, am also a woman in her twenties who has made some mistakes. I am in the wonderful position of having you by the short hairs. I have the story, and so I get to tell it to you the way I want. That means you get to understand me, not just my story, so don’t be surprised if there’s some drama. I’m going to attempt to come at this account honestly, but I’ll also admit to a significant pro-me bias. If you get anything out of this, ideally it won’t be you being more or less on one side or the other, but simply understanding that I am (or at least was) human.

And I was very much feeling only human as I dragged my tired ass down 23rd Street at 2:45 a.m. after working a sixteen-hour day at a start-up that (thanks to an aggressively shitty contract I signed) will remain nameless. Going to art school might seem like a terrible financial decision, but really that’s only true if you have to take out gobs and gobs of student loans to fund your hoity-toity education. Of course, I had done exactly that. My parents were successful, running a business providing equipment to small and medium-sized dairy farms. Like, the little things you hook up to cows to get the milk out, they sold and distributed them. It was good business, good enough that I wouldn’t have had a lot of debt if I’d gone to a state school. But I did not do that. I had loans. Lots. So, after jumping from major to major (advertising, fine art, photography, illustration) and finally settling on the mundane (but at least useful) BFA in design, I took the first job that would keep me in New York and out of my old bedroom in my parents’ house in Northern California.

And that was a job at a doomed start-up funded by the endless well of rich people who can only dream the most boring dream a rich person can dream: being even more rich. Of course, working at a start-up means that you’re part of the “family,” and so when things go wrong, or when deadlines fly past, or when an investor has a hissy fit, or just because, you don’t get out of work until three in the morning. Which, honestly, I hated. I hated it because the company’s time- management app was a dumb idea and didn’t actually help people, I hated it because I knew I was just doing it for money, and I hated it because they asked the staff to treat it like their whole life rather than like a day job, which meant I didn’t have any time to spare to work on personal projects.

I was actually using my degree doing actual graphic design and getting paid enough to afford rent less than one year out of school. My work environment was close to technically criminal and I paid half of my income to sleep in the living room of a one-bedroom apartment, but I was making it work.

I fibbed just now. My bed was in the living room, but I mostly slept in the bedroom—Maya’s room. We weren’t living together, we were roommates, and April-from-the-past would want me to be very clear about that. What’s the difference between those two things? Well, mostly that we weren’t dating before we moved in together. Hooking up with your roommate is convenient, but it is also a little confusing when you lived together through much of college. Before finally hooking up and have now been a couple for more than a year.

If you happen to already live together, when does the “Should we move in together?” question come up? Well, for Maya and me, the question was “Can we please move that secondhand mattress out of the living room so that we can sit on a couch when we watch Netflix?” and thus far my answer had been “Absolutely not, we are just roommates who are dating.” Which is why our living room still had a bed in it.

I told you there would be drama.

Anyway, back to the middle of the night that fateful January evening. This shitty app had to get a new release into the App Store by the next week and I had been waiting for final approvals on some user interface changes, and whatever, you don’t care—it was boring work BS. Instead of coming in early, I stayed late, which has always been my preference. My brain was sucked entirely dry from trying to interpret cryptic guidance from bosses who couldn’t tell a raster from a vector. I checked out of the building (it was a coworking space, not even actual leased offices) and walked the three minutes to the subway station.

And then my MetroCard got rejected FOR NO REASON. I had another one sitting on my desk at work, and I wasn’t precisely sure how much money I had in my checking account, so it seemed like I should walk the three blocks back to the office just to be safe.