Items related to Dwyane Wade: The Inspiring Story of One of Basketball's... 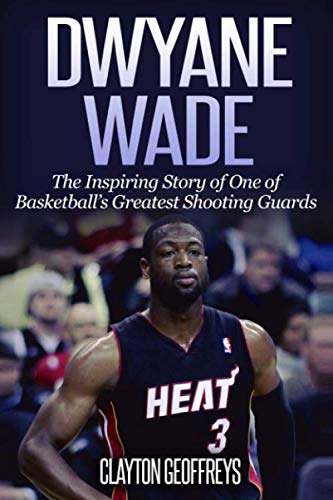 For a limited time, if you buy the print edition as a gift, you can keep the Kindle edition for yourself!

Read on your PC, Mac, smartphone, tablet or Kindle device!

Newly revised to reflect his retirement, in Dwyane Wade: The Inspiring Story of One of Basketball's Greatest Shooting Guards, you'll read about the inspirational story of basketball's star, Dwyane Wade.

Dwyane Wade served as the face of the Miami Heat franchise for over a decade, having led the Heat to an incredible 2006 NBA Championship alongside Shaquille O'Neal. Aside from his accomplishments early in his career, Wade also cemented his legacy in basketball as a member of the Big Three, when LeBron James, Chris Bosh, and Wade united as members of the Miami Heat from the 2010-2011 NBA season to the 2013-2014 NBA season. In the four years they played together, they collectively led the Heat to the NBA Finals in every year, winning two championships together.

Wade retired at the conclusion of the 2018-2019 NBA season as one of the most decorated Miami Heat players in franchise history. He was a three-time champion and a thirteen-time All-Star.

Here is a preview of what is inside this book:

An excerpt from the book:

No player in the history of the NBA has done as much for the Miami Heat organization as one man in particular. That is why the Heat franchise has become synonymous with that player’s name. The player in question is Dwyane Wade. Ever since entering the NBA in 2003, D-Wade, as he is commonly called, has transformed the Miami Heat franchise from being cellar-dwellers to a team to be contended with in the NBA. He has put the Heat organization on the NBA map with his terrific scoring, leadership abilities, and his penchant for winning titles.

A surefire difference-maker who can do it all on the court for the Heat, whether in scoring, passing, rebounding, or defending, Dwyane Wade has been one of the best players the NBA has seen in this generation. Nicknamed “The Flash,” Wade runs the floor as fast as a race horse and can finish with a flourish at the basket despite being a lot smaller than most of the men he clashes with at the rim. With his superior dribbling abilities and point guard instincts, Wade can dictate the tempo of the game just by making plays for his teammates. And despite his height of merely 6’4”, Wade has hops high enough to block baskets at the rim, and he is widely regarded as the best shot-blocking guard in the history of the NBA.