Items related to Treatise on the Apparitions of Spirits and on Vampires...

Calmet, Dom Augustin Treatise on the Apparitions of Spirits and on Vampires or Revenants of Hungary, Moravia, et al.: The Complete Volumes 1 and 2: Expanded edition.

Treatise on the Apparitions of Spirits and on Vampires or Revenants of Hungary, Moravia, et al.: The Complete Volumes 1 and 2: Expanded edition. 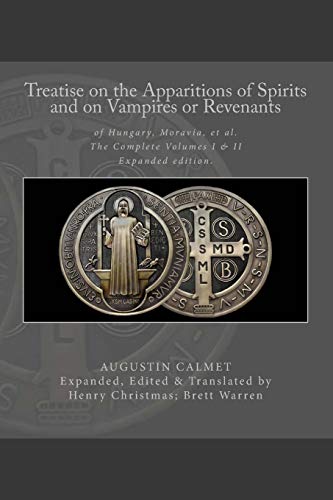 Traité sur les apparitions des esprits et sur les vampires ou de revnants. A 1700's treatise surfaced two centuries ago regarding the supernatural and scientific phenomenon that plagued Europe in an era when Magic, witchcraft, demonology, instances of haunting and even cases of vampires were recorded in historical documentation. It was during the age of reason when a Black Monk from the Benedictine Order of the 18th century, penned a work that would become one of the most influential and controversial works of his time. A plethora of cases regarding events in the supernatural had plagued mankind with fear and mystery throughout history, many inhabitants to the regions of Europe came under an epidemic of social hysteria which steamed from reports of corpses rising from their graves, killing and sucking the blood of victims inhabiting small villages or visitations and the haunting of ghosts, evil spirits and demons. The Black Monk, Abbot Don Augustin Calmet tasked himself with the study of these real and historically documented reports for the purpose of providing the public with the rules to determine a claim’s legitimacy through philosophical reasoning and scientific examination that was approved by the King of France in 1746. This work provides an in depth look into the history of most superstitions, mythologies, the analysis of events depicted in ancient texts from various religions and historically renowned cases which had in fact occurred.

Calmet lays out the rules for determining the fraudulent claims from the real while also providing a "how to" manual when dealing with or investigating occult matters in witchcraft, ghosts, vampires and demonic possessions. This work was written by an ordained abbot monk and was accepted by European society as scientific research in his time.

This new edition includes translations from the French and Italian works that are being published for the first time! Including the missing letters, detailed notes definitions, and translations of Latin, Italian and French phrases quotes and citations

This treatise investigates a number of topics:

DISSERTATION ON
THE APPARITIONS OF THE SOULS OF THE DEAD
THE APPEARANCE OF THE LIVING AS PROJECTIONS
THE GHOSTS WHO RETURN TO THE EARTHLY BODY
THE OUPIRES OR VAMPIRES, VROUCOLACAS, ETC.

From Volume 1 * Angelic and demonic intervention
* The reality and mythology of magic; divination; curses
* Understanding the difference between real accounts vs that of impostors
* Examples and instances of real possessions caused by the devil
* The power and authority Satan and demons possess
* False prophets and predictions of happenstance; * The appearance and examinations of specters and pretended specters
* Examinations on Specters that haunt houses
* The dead who return to the earth
* Explanations and objections on the instances of apparitions;
* The studies on Familiars; Elves
* The secrets of physics and chemistry

Also included from volume 2
* Resurrection of the dead
* Instances of people returning from the grave
* Examination to people being buried alive but thought to be dead
* Examinations of (then) modern revenants, ghosts and vampires
* The study of vampires, ghosts in mythology and religions
* Historically recorded accounts of vampires between the 17th and 18th centuries
* Examinations on bodies that do not decay and corpses that show life after death
* The power of demons to kill and restore life
* On the return of the excommunicated
* Instances of bodies that devour their own flesh
* Instances on exhumed bodies and their examinations
* Analysis on whether vampires or revenants are truly dead
* Instances of people returning from the grave months after declared deceased.

Augustin Calmet was an 18th century abbot Black Monk of the French Benedictine Order and worked as a scholar on several Influential dissertations and literary works on history, biblical commentary, as well as spiritual significance and even investigation into occult matters.

Other works by Dom Augustin Calmet include:

1750 - Bibliothčque Lorraine
- A Catalogue of the Writers of Lorraine

Treatise on the Apparitions of Spirits, and on Vampires, or Revenants of Hungary, Moravia, Et Al.: The Complete Volumes: Vol 1-2