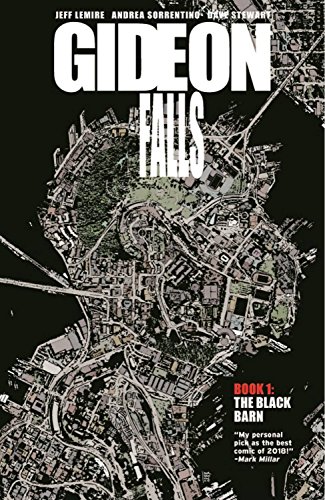 The lives of a reclusive young man obsessed with a conspiracy in the city's trash and a washed-up Catholic priest arriving in a small town full of dark secrets become intertwined around the mysterious legend of The Black Barn―an otherworldly building alleged to have appeared in both the city and the small town throughout history, bringing death and madness in its wake.

Rural mystery and urban horror collide in this character-driven meditation on obsession, mental illness, and faith that Mark Millar (Hitgirl) called his "personal pick as the best comic of 2018!" Also featuring a variant cover gallery from some of comics' best artists, including Cliff Chiang (PAPER GIRLS), Jock (WYTCHES), Skottie Young (I HATE FAIRYLAND), and more!

“I know everybody lies in blurbs, but this comic really is amazing. Do not gloss over these words. This is two guys at the top of their game and my own personal pick as the best comic if 2018 if the first issue is anything to go by.” ―Mark Millar


“Sorrentino’s art offers some visually complex layouts that I found to be quite compelling. Overall, I’m really enjoying this story and the mysterious complexities it brings.” ―Impulse Gamer


"If you were a fan of Jeff Lemire and Andrea Sorrentino Green Arrow or Old Man Logan, which were instant classics in the eyes of many, then check out this original story." ―IGN


"Saturated with a horrific sense of anxiety." -Entertainment Weekly