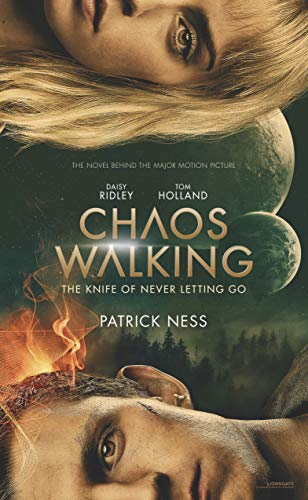 A dystopian thriller follows a boy and girl on the run from a town where all thoughts can be heard – and the passage to manhood embodies a horrible secret.

Todd Hewitt is the only boy in a town of men. Ever since the settlers were infected with the Noise germ, Todd can hear everything the men think, and they hear everything he thinks. Todd is just a month away from becoming a man, but in the midst of the cacophony, he knows that the town is hiding something from him — something so awful Todd is forced to flee with only his dog, whose simple, loyal voice he hears too. With hostile men from the town in pursuit, the two stumble upon a strange and eerily silent creature: a girl. Who is she? Why wasn't she killed by the germ like all the females on New World? Propelled by Todd's gritty narration, readers are in for a white-knuckle journey in which a boy on the cusp of manhood must unlearn everything he knows in order to figure out who he truly is.

Patrick Ness, an award-winning novelist, has written for England's Radio 4 and SUNDAY TELEGRAPH and is a literary critic for the GUARDIAN. This is his first book for young adults. Born in Virginia, he currently lives in London.

THE FIRST THING you find out when yer dog learns to talk is that dogs don’t got nothing much to say. About anything.

We’re walking across the wild fields southeast of town, those ones that slope down to the river and head on toward the swamp. Ben’s sent me to pick him some swamp apples and he’s made me take Manchee with me, even tho we all know Cillian only bought him to stay on Mayor Prentiss’sgood side and so suddenly here’s this brand-new dog as a present for my birthday last year when I never said I wanted any dog, that what I said I wanted was for Cillian to finally fix the fissionbike so I wouldn’t have to walk every forsaken place in this stupid town, but oh, no, happy birthday, Todd, here’s a brand-new puppy, Todd, and even tho you don’t want him, even tho you never asked for him, guess who has to feed him and train him and wash him and take him for walks and listen to him jabber now he’s got old enough for the talking germ to set his mouth moving? Guess who?

"Just have yer stupid poo and quit yapping about it."

I take a switch of grass from beside the trail and I swat after him with it. I don’t reach him, I don’t mean to reach him, but he just laughs his little barking laugh and carries on down the trail. I follow after him, switching the switch against the grass on either side, squinting from the sun, tryingnot to think about nothing at all.

We don’t need apples from the swamp, truth be told. Ben can buy them at Mr. Phelps’s store if he really wants them. Also true: going to the swamp to pick a few apples is not a job for a man cuz men are never allowed to be so idle. Now, I won’t officially become a man for thirty more days. I’ve lived twelve years of thirteen long months each and another twelve months besides, all of which living means I’m still one month away from the big birthday. The plans are being planned, the preparayshuns prepared, it will be a party, I guess, tho I’m starting to get some strange pictures about it, all dark and too bright at the same time, but neverthelessI will become a man and picking apples in the swamp is not a job for a man or even an almost-man.

But Ben knows he can ask me to go and he knows I’ll say yes to going because the swamp is the only place anywhere near Prentisstown where you can have half a break from all the Noise that men spill outta theirselves, all their clamor and clatter that never lets up, even when they sleep, men and the thoughts they don’t know they think even when everyone can hear. Men and their Noise. I don’t know how they do it, how they stand each other.

"Squirrel!" Manchee shouts and off he goes, jumping off the trail, no matter how loud I yell after him, and off I have to go, too, across the (I look round to make sure I’m alone) goddam fields cuz Cillian’ll have a fit if Manchee falls down some goddam snake hole and of course it’ll be my own goddam fault even tho I never wanted the goddam dog in thegoddam first place.

"Manchee! Get back here!"

I have to kick my way thru the grass, getting grublets stuck to my shoes. One smashes as I kick it off, leaving a green smear across my sneakers, which I know from experience ain’t coming out. "Manchee!" I rage.

I grab Manchee by the collar and hit him hard across his back leg. "Ow, Todd? Ow?" I hit him again. And again. "Ow? Todd?"

"Come on," I say, my own Noise raging so loud I can barely hear myself think, which is something I’m about to regret, you watch.

And I really, really shoulda looked round again.

Book Description Condition: New. This is a brand new book! Fast Shipping - Safe and Secure Mailer - Our goal is to deliver a better item than what you are hoping for! If not we will make it right!. Seller Inventory # 1XGJEX000TR8_ns